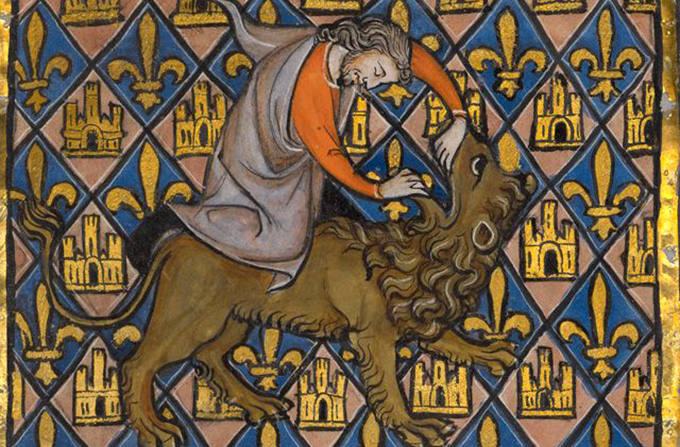 “There is one vice of which no man in the world is free; which every one in the world loathes when he sees it in someone else; and of which hardly any people except Christians ever imagine that they are guilty themselves. I have heard people admit they are bad-tempered, or that they cannot keep their heads about girls or drink, or even that they are cowards. I do not think I have ever heard anyone who was not a Christian accuse himself of this vice. And at the same time I have very seldom met anyone who was not a Christian who showed the slightest mercy to it in others. There is no fault which makes a man more unpopular, and no fault which we are more unconscious of in ourselves. And the more we have it ourselves, the more we dislike it in others.”

That was a quote from the beginning of C.S. Lewis’ description of Pride in chapter 8 of his book Mere Christianity. He says this better than I ever could, so I’m about to quote him at length here. For any not acquainted with Lewis: I think he was about as orthodox as one can be without actually being Orthodox. I’ve been told that Father Thomas Hopko (+ memory eternal), former dean of Saint Vladimir’s Seminary, occasionally referred to him as “our Holy Father C.S. Lewis”! I think there are a few matters where we Orthodox would disagree with Lewis, but for the most part I still find he kept hitting the nail on the head.

“The vice I am talking about is Pride or Self-Conceit; and the virtue opposite to it, in Christian morals, is called Humility…  According to Christian teachers, the essential vice, the utmost evil, is Pride. Unchastity, anger, greed, drunkenness, and all that, are mere fleabites in comparison: it was through Pride that the devil became the devil. Pride leads to every other vice: it is the complete anti-God state of mind…  if you want to find out how proud you are the easiest way is to ask yourself, ‘How much do I dislike it when other people snub me, or refuse to take any notice of me, or shove their oar in, or patronize me, or show off?’

“The point is that each person’s pride is in competition with every one else’s pride. It is because I wanted to be the big noise at the party that I am so annoyed at someone else being the big noise…  Pride is essentially competitive – is competitive by its very nature – whilst the other vices are competitive only, so to speak, by accident. Pride gets no pleasure out of having something, only out of having more of it than the next man. We say that people are proud of being rich, or clever, or good looking, but they are not. They are proud of being richer, or cleverer, or better-looking than others. If everyone else became equally rich, or clever, or good looking there would be nothing to be proud about. It is the comparison that makes you proud: the pleasure of being above the rest… Greed may drive men into competition if there is not enough to go round; but the proud man, even when he has got more than he can possibly want, will try to get still more just to assert his power… What is it that makes a man with £10,000 a year anxious to get £20,000 a year? It is not the greed for more pleasure. £10,000 will give all the luxuries that any man can really enjoy. It is Pride – the wish to be richer than some other rich man, and (still more) the wish for power.”

A Misunderstanding about Pride

Now, this is me talking:

Sometimes the word “pride” is used to mean taking satisfaction in something, in the sense of being pleased with it, to “take pride” in a job well done or in one’s children or in one’s heritage. That is not what is condemned here, so long as we remember that all these things are ultimately gifts of God, not just our own doing. In the Christian Tradition, the Scriptures and the Fathers, the word “pride” generally means haughtiness, arrogance, lack of humility, particularly in relation to God. Pride is putting oneself in the place of God, trying to make oneself the center of reality, being “proud” without relation to God.

Where does Pride come from?

In the 1967 movie “Bedazzled” * (which still shows up on TV occasionally and you can also find it elsewhere), a British short order cook (geeky Dudley Moore) sells his soul to the devil (handsome, suave Peter Cook). The movie is very funny in many ways, and theologically very correct. As they walk through a London park, the cook says to the devil (this is the approximate dialog), “It seems to me you had it pretty good up in heaven. How did you get thrown out?” The devil says, “I’ll show you. I’ll stand up here on this postbox and be God, and you praise me.” So the cook stands below singing, “Holy holy holy, Glory to you in the highest” and so on for some time. Finally he says to the devil on the pedestal, “I’m getting tired of this. Can we trade places?” The devil answers, “That’s just how it happened.” Yes! Pride says: “I’m tired of being a creature. I don’t want to be obedient. I want what I want. I want to be the center of things. I want it all to revolve around me. I want my own way.”  “I…”  “I…”  “I…”  “I want to be…my own god.” (*I’d advise you to ignore the 2000 remake of it.)

What our Scriptures and Tradition say about Pride

The Biblical teaching about Pride is, so I read, unparalleled in other religions and ethical systems. Pride was the sin of Adam and Eve: The serpent said, “Eat of this [fruit], and you will be like God” Genesis 3:12. And so for our selfish purposes we tried to grasp that which was to have been a gift of God – deification. Most of the Fathers say that Pride is the ultimate sin, the essence of sin, that all other sins, even the other six deadly sins, flow out of Pride.  Boasting and trusting in oneself or in anything human apart from God is condemned again and again. Religious, national and ethnic pride is condemned: John the Baptist told the pharisees,”Do not say to yourselves ‘we have Abraham as our father’. God is able to raise up sons of Abraham from these stones.” Luke 2:8  Likewise if we Orthodox or Americans get proud, think we are indispensable, God will put us down and raise up new ones.

In the New Testament we see that even God himself is not proud. God does not stand on his own dignity. He becomes incarnate: as a Baby in the womb, an Infant, a Boy, a Man… and a human Corpse. Like the father of the prodigal son God, abandoning his dignity, humbly rushes out to forgive us. Saint Paul says that Christ “did not count equality with God a thing to be grasped, but rather emptied himself… even to death on a Cross.” Philippians 2:5  Paul warns often against pride. He says that no one has grounds for bragging, “for by grace you have been saved;… it is the gift of God,… lest anyone should boast.” Ephesians 2:8-9  So far as I can see the only people Jesus condemned were the proud scribes and pharisees who were so sure that they were right, that they were good, that they were so much better than others.

There are so many Biblical and patristic quotations condemning pride that we could go on here almost forever. The Song of Mary, which we Orthodox sing at Orthros (Matins) and which Western Christinas sing at Vespers, sums up the Christian attitude: [God] “has shown strength with his arm; he has scattered the proud in the imagination of their hearts. He has put down the mighty from their seat and has exalted the humble and meek.” Luke 1:51-52  God does not tolerate human Pride. “A man’s pride brings him humiliation… pride goes before destruction, a haughty spirit before a fall.” Proverbs 16:18

Look first within yourself! This won’t easy, but try. Hard.

However, as Lewis said, it is often hard to see Pride in ourselves, so it may be helpful to compare ourselves to some almost guaranteed illustrations of Pride, so we can then look back and say, “Oh, no. I’m just like that, too.” As you do this, do not judge persons. God alone can do that. But we can judge actions which are evidences of Pride.

So… I can think of no better place to observe Pride than in politics, year after year, in all parties and every political persuasion. A humble politician is a rarity. Our current American political system seems to require most politicians to be (or at least pretend to be) proud. “I have all the answers. All my opponents are stupid fools. I alone can save you.” And then if they are elected, watch out: “We are totally in the right. We make no mistakes. We admit no errors. For we are winners.” Mere mortals cannot keep that up without destroying themselves. You have observed many times what happens next. God intervenes.To repeat Proverbs 16:18, “Pride goes before…a fall” – and sometimes the nation goes down with them.

Certainly there are proud Church leaders too, but at least the Church’s system doesn’t encourage it. Before Holy Communion at every Divine Liturgy we pray: “I believe, O Lord, and I confess that thou art truly the Christ the Son of the Living God who came into the world to save sinners of whom I am chief.” As he receives Holy Communion the priest says, “The precious and all-holy Body [Blood] of our Lord and God and Savior Jesus Christ is imparted unto me, the unworthy priest. N.”  In the Divine Liturgy of Saint Basil the priest prays (I wish clergy would read this aloud for all to hear), “Be mindful also, O Lord, of my unworthiness according to the multitude of thy compassions; pardon my every transgression both voluntary and involuntary and withhold not, because of my sins, the grace of thy Holy Spirit from these gifts here spread forth.” If I could find politicians with this attitude, I’d vote for them in a minute. 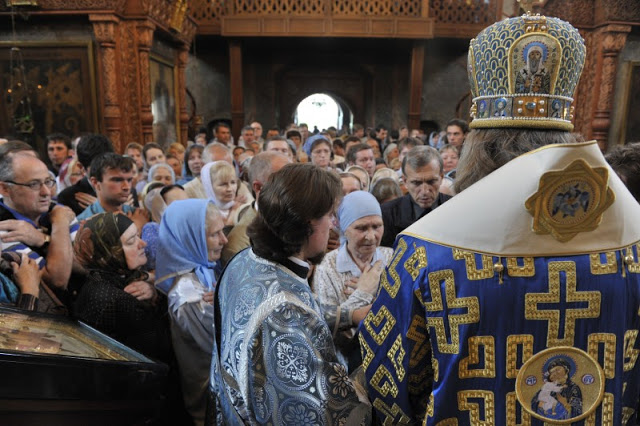 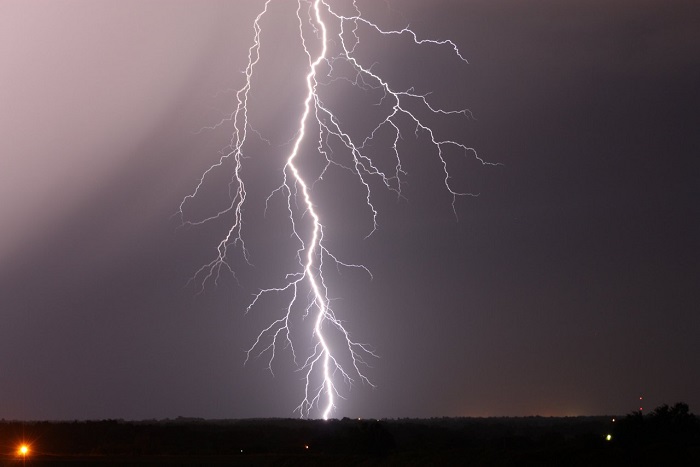 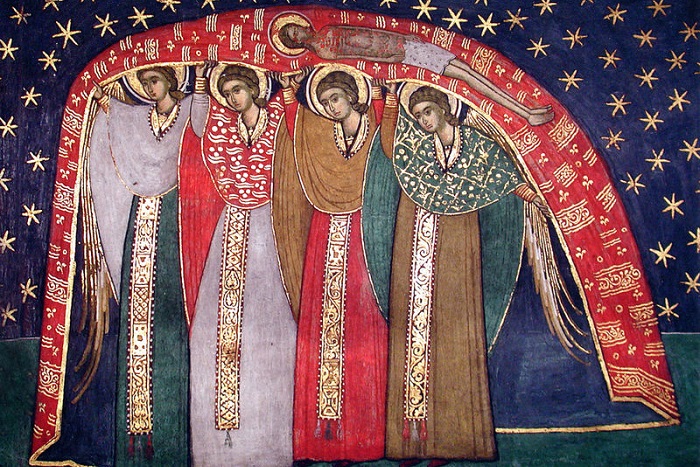