Parting with the St. Panteleimon Monastery

On the way to our cell, we dropped in the local icon shop. Nothing special, except the prices were slightly higher than elsewhere. However, I would certainly recommend buying their books. Most of them were from various Russian Orthodox publishers, but the seals of both the Monastery and the Holy Mountain made them a very good souvenir that you cannot buy in Russia. Igor bought the latest beautiful reissue of the Starets Silouan and did not let go of it from the airport in Thessaloniki to his front door.

We unanimously decided to give our remaining gifts from home to the friendly guest master, which he really appreciated. We picked up our diamontiria, put on our backpacks and, casting a farewell glance at our cell, headed for the exit. The companion of Father Sergius said that they would be waiting for us near the monastery gates after the meal. As usual, Father Sergius was busy taking pictures. Having promised to his nine children in Minsk that he would bring plenty of photographs from Athos, he was certainly keeping his promise. There was childish simplicity in him that I personally seem to have lost.

The place at the gates of the monastery is special. This is proved by a miraculous image of a woman accepting alms, clearly visible in a photograph once taken here during a charitable distribution of bread. From that image it was concluded that charity is pleasing to the Mother of God and that She Herself visits monasteries. We stood for some time in that place. Then, lining up silently in a military manner, we turned one hundred and eighty degrees and walked away.

Once Again, On Foot along the Trails of Mount Athos

Again, our walking sticks began rattling on the Athonite stones. After walking around the peninsula for some time, we appreciated the relief during the last day of our journey. The road to the Xenophontos Monastery did not rise or go downhill. Instead, it twisted, repeating the coastline at some elevation from the sea. Walking was easy, and there was no need to climb anywhere. A great end to the pilgrimage route. Once again, my team began chanting the Jesus Prayer loudly and unanimously, making the entire ornithic brethren to shush in amazement. Father Sergius, although constantly taking pictures, was still able to participate in our spiritual choir. His singing stood out, however—he had a good ear and sang beautifully. I could hear this prayer inside me long after having returned from Athos. Perhaps it sounded funny, but it was completely sincere and free.

The most widespread trees accompanying us along the entire coast were olives. Their branches were densely covered with fruits and resembled our unripe cherry plum with leaves, shaped like small fish. I picked a few green berries as a trophy for my youngest son. Behind the following turn, both monasteries that we were going to visit, appeared in all their glory. They were not far at all, about a half an hour away. To our left lay the serene sea. The boats scurrying along its shores were not disturbing its thousand-year-old tranquillity in the least. To the right rose the gentle hills of the western coast of Athos. The air was clean and gentle. It looked like a resort, making it easy to forget that we were at the forefront of a spiritual war for the whole world.

Xenophontos and Saying “Goodbye” to Icons

Our visit to the Xenophontos Monastery is best remembered for the aromatic coffee in the arkhondarik and the monks unitedly polishing the candlesticks in the church. The dismantled chandelier was laying in the middle of the cathedral. Carefully stepping over the Byzantine copper eagles, we approached the icon of the Great Martyr George the Victorious and the Mother of God Hodegetria. Both images are miraculous. Kneeling before the icons and venerating the shrines, I was not asking for anything, only thanking God for the Athos that was revealed to me, the one that did not disappoint me one bit, becoming a gentle healing for my soul. In the courtyard by the orange tree, we lingered for a short while to take pictures. It was time to move on.

Walking along the shore, we saw a wonderful mosaic of St. George, decorating a dry spring. Everyone came up to venerate the image and to say goodbye. Just like the “babushkas” in my rural parish, we began our pilgrimage with greeting the miraculous icons and ending it with saying “goodbye” to them.

The clearing nearby was filled with delicate bluish-pink crocuses. I had seen something like that only high in the mountains of the Caucasus. A lone mule followed us with an indifferent look without ceasing to chew, until we disappeared around the turn. Just before reaching the final point of our pilgrimage, we met a black-bearded monk in horn-rimmed glasses, quickly walking somewhere without reacting to our greetings in any way. He walked away without even raising his eyebrow. He was on his way to where we had just left—deep into the peninsula, where the lamps burn, the passions disappear and where Heaven unites with the earth. We were moving away from the true spiritual life, approaching with every step the seething sea of the world. Holy and Venerable Fathers of Mount Athos, pray to God that we may become a small leaven added to the dough of this world. Pray to God that we may preserve the Never-Evening Light that has dawned again in our hearts. 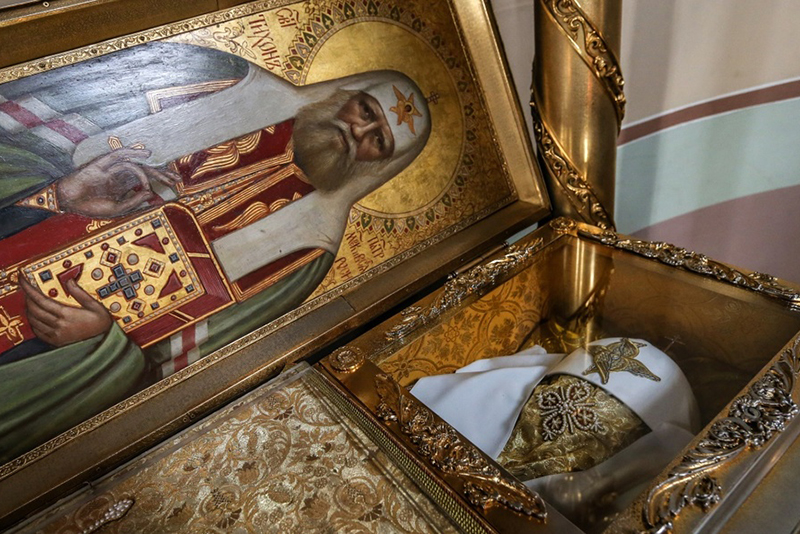