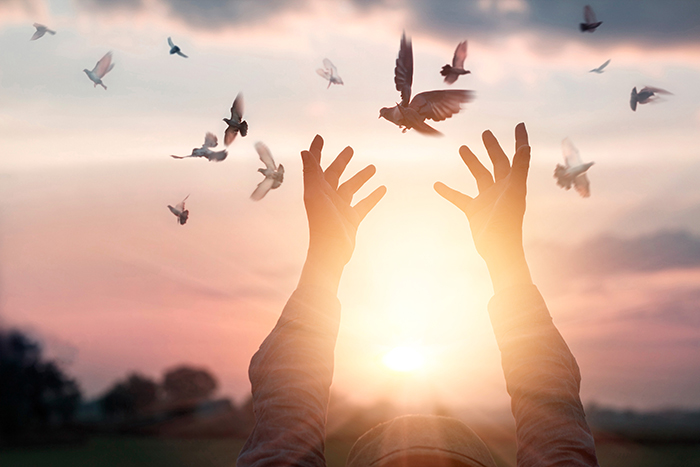 Because of this Sunday’s Gospel (Matthew 6:14-21), the day is popularly called Forgiveness Sunday. Orthodox in the Slavic tradition normally serve Forgiveness Vespers, as do an increasing number of Greek and Antiochian Orthodox parishes. This is a beautiful way to enter Great Lent. At the end of Vespers, all come forward and one by one ask each other’s forgiveness: “Forgive me a sinner.”

“Forgive me a sinner.” as we exchange the peace in the Orthodox way. Western Ash Wednesday is individualistic and a bit forbidding. One by one people receive the ashes and are told, “Remember, O man, that you are dust and to dust you shall return.” And that’s the truth. It’s good to remember our mortality as we begin Lent. The Orthodox entrance into Lent is communal and sweet, filled with love and forgiveness. I think it is an even better way to begin Lent.

Forgiveness: “If you forgive men their trespasses your heavenly Father will also forgive you, but if you do not forgive men their trespasses neither will your Father forgive your trespasses.” Is that clear enough? And it’s no secret, for every day were pray this terrifying prayer: “Forgive us our trespasses as we forgive those who trespass against us.” Lord, if I refuse to forgive someone, please don’t forgive me. Lord, if I hold a grudge against someone, please hold a grudge against me. We hear this again and again in the New Testament. Take the parable of the wicked servant who was forgiven a huge debt by his master, but who refused to forgive his fellow servant a small debt, The master was angry and had him killed! And, says Jesus, “so will my heavenly Father do to you if you do not forgive your brothers from your heart.” (Matthew 18:35) Again is that clear enough? And it’s true. God has built it into the nature of things that a hard heart can kill our immortal soul, and as we go dead on the inside, Hell can begin even on this side of death.

Also this Sunday before you go into Lent, if there is anyone you have not apologized to, apologize. Say “I’m sorry”. Be tough on yourself: Say it, or write it, or e-mail it, or if the person is departed, ask the angels to convey the message. Even if you think you’ve done nothing wrong, if you are at odds with someone and haven’t tried to make up, say: “If I’ve done anything to offend you, I’m sorry.” For the truth is if there is someone you’re not getting along with, likely you were part of the problem – even if you didn’t intend it, even if you don’t know what it was, even if you’re too proud to consider the possibility. My experience after 53 years as a pastor is that most hurts are unintentional. It’s just that people are preoccupied with their own problems or overcome by them, and we just get in the way at the wrong time. Or people mis-speak or mis-act and never notice it. I’ve done a lot of counseling, I’ve heard a lot of confessions, I’ve done a lot of living, I’ve done a lot of unintentional mis-speaking and mis-acting. And I’m convinced that most of the time people who hurt each other did not mean to. The result is that both sides think that the other was in the wrong.

And the fact is, if you have not tried to make up you are in the wrong for precisely that reason, because you haven’t made it clear that you will forgive. Again, I’m convinced that when people don’t apologize to us, often the reason is because they’re afraid if they say it they’ll be rejected, afraid we’ll beat ’em over the head with it. So make it easy for people to apologize. Be like the father of the prodigal son who, before his son could say a word of apology, rushed out to greet him, so his son would know he would be forgiven. Be like God who has rushed out to greet us in our Lord Jesus Christ, so that before we have said even a word of repentance, we already know we will be forgiven.

What if the person who has hurt you never says he’s sorry? Then if he shows any sign of wanting to make up, any sign of being sorry, accept it as an apology. My father was like that; he just could not bring himself to say those words “I’m sorry”.  But he would show it in a multitude of ways. OK, that’s good enough. I wish my dad could have said it, but it was obvious he was sorry, and I wish I had more quickly accepted that as an apology, for I knew he loved me. And if you are easy with others, that will make up for the thousand times God has been easy with you, when you never told him you were sorry. Despite that, he has kept pouring out his blessings on you. Be like him. “Be merciful as your Father is merciful.” (Luke 6:36) Do not be like Queen Elizabeth I. She was once angry with someone and was told, “But your majesty, God has forgiven him.” According to the story she replied “God may forgive him, but I never will!” I hope she got over that. I mean, who do we think we are? holier than God? God forgives but we won’t? Forgive easily, quickly.

But what if the other person doesn’t even show a sign of being sorry? What if he’s done you wrong and you’ve given him every opening, and he could not care less? Forgive him anyway .* I don’t mean you should pretentiously, piously, say “I forgive you”. If he’s not interested in making up, don’t waste your breath on him. But if you can’t forgive openly, at least forgive in your heart- not for his sake, but for yours, for the sake of your immortal soul. Because the great danger in not forgiving people, the great danger of spending your life angry at people and holding grudges, is what it will do to you. It will give that unrepentant rat power over you forever. It will allow him to destroy your inner spirit. It will make you miserable. It will keep you from real prayer. You’ll be mouthing prayers but thinking not about God and his love but about that rotten scoundrel and how nasty he was to you. It will distract you from loving. It will corrupt and corrode your spirit, and in the end, if you don’t give it up, it will destroy your soul. The hard heart, holding a grudge, is a foretaste of the misery of Hell. And if you don’t forgive and let it go, finally it will turn into the Real Thing. Don’t let anyone do that to you.

What exactly does it mean to forgive? It does not mean to forget. That’s impossible to do. For as soon as we remember to forget it, we have remembered it again! When people sin against us, it is like a physical pain. If we keep digging into it, it will never heal. The solution is to take the treatment the doctor prescribes till it just goes away and you don’t notice it any more. Likewise when someone sins against us, it is like a wound to the soul, so we must do what the heavenly Physician prescribes: Every time the remembrance of it rises in your heart or mind, immediately forgive, put it down, and do this again and again till finally the pain goes away. Forgiving is a process. When people come to Confession, almost always I ask, “Is there anyone you have not forgiven or are not prepared to forgive?” Sometimes they say, “I’ve tried to forgive, but I think I must not have, because it keeps coming up again. It still hurts.” Then almost always I quote C.S. Lewis who wrote (I paraphrase) that when Christ told Peter to forgive 7 times 7 times, this meant for every sin. Forgive that sin again and again and again and again and again and again and again, and then keep forgiving till the pain is gone, and you’ll hardly even notice when it went away.

Let me tell you 2 of my favorite stories about forgiveness:

1. One Sunday Saint John the Merciful, Patriarch of

Alexandria, right in the middle of Divine Liturgy, remembered that there was a priest in the city who was angry at him, with whom he had not made up. And then he remembered the words of our Lord: “If you bring your gift to the altar and there remember that your brother has something against you, leave your gift before the altar and go. First make peace with your brother, and then come and lay your gifts before the altar.” (Matthew 5:23-24) So before the Great Entrance, before he placed the Holy Gifts on the altar, Patriarch John left the procession – I wonder how long the poor choir had to keep singing! – and he sent for his brother priest, made peace and only then did he come back to place the Holy Gifts on the altar.

2. There was a monk who had led a less than exemplary life, but nevertheless as he lay on his deathbed was happy as a clam, not worried at all. His fellow monks said: “With the kind of life you’ve led, why aren’t you afraid of dying? afraid of God’s judgment?” The man answered, “Because I have forgiven everyone who ever hurt me, so I know God will have to forgive me.” And he died a happy man. 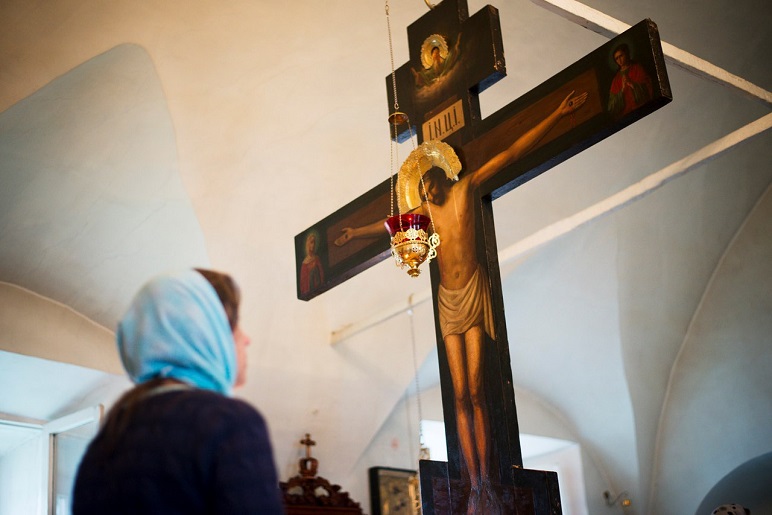 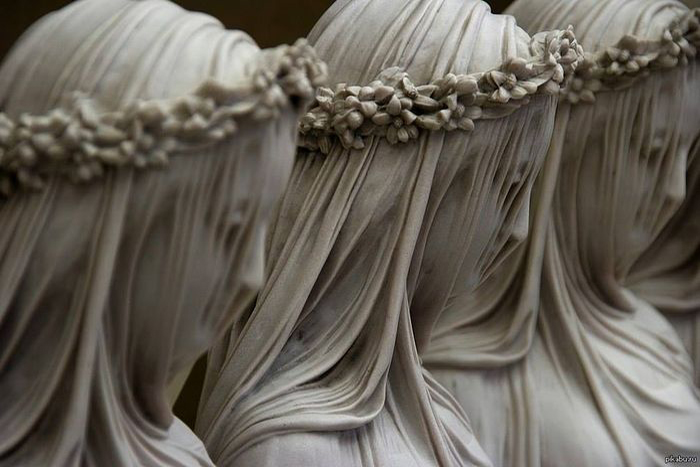 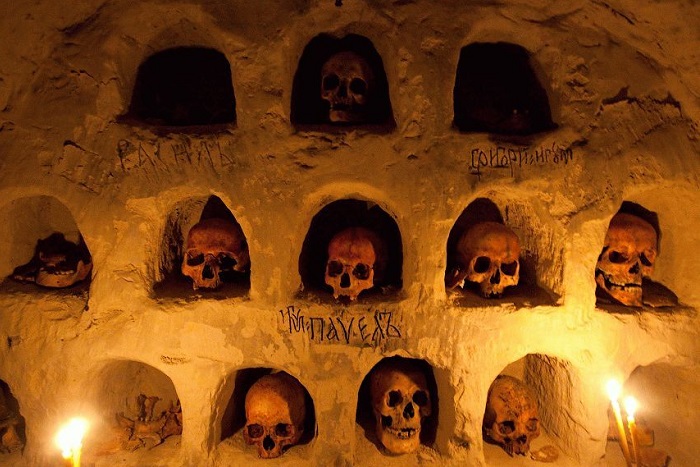