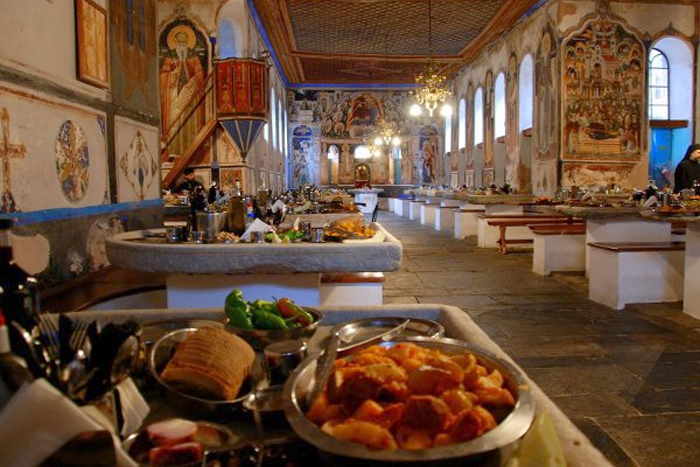 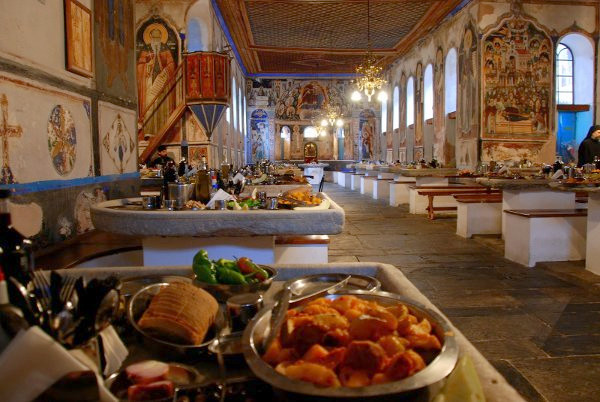 The first question which presents itself during the Lenten season is one of cuisine:  “What on earth can I eat since the Church forbids eating meat, fish, and dairy?”  It is a reasonable question, but must not be allowed to skew one’s understanding of what Lenten fasting is all about or give the impression that Lent is primarily about food.
For one thing, the Church does not have any food laws in the same way that Judaism, Islam, or Hinduism have food laws. Religions often have food laws, but Christianity is not a religion.  Rather it is our participation in this age of the powers of the age to come, and as such it transcends religion with all its categories, including the category of unclean food.  Religions have such a category, and both Judaism and Islam forbid the eating of pork.  Hinduism (at least as practised by some) famously forbids eating cows, and some of its literature declares that no one who eats meat can have any knowledge of God.  These are true food laws, and no one can obtain a dispensation from them to eat pork any more than they could obtain a dispensation from the law of gravity.  They are not “food guidelines”, but “food laws”.  Unclean food remains unclean, no matter what.
Christianity knows nothing of this.  St. Paul declared that “nothing is unclean in itself” (Romans 14:14), and that “nothing is to be rejected if it is received with thanksgiving, for then it is sanctified by the Word of God and prayer”.  To deny this in the Church, he says, is one of the “doctrines of demons” (1 Timothy 4:1-5).  Our fasting rules are not food laws. 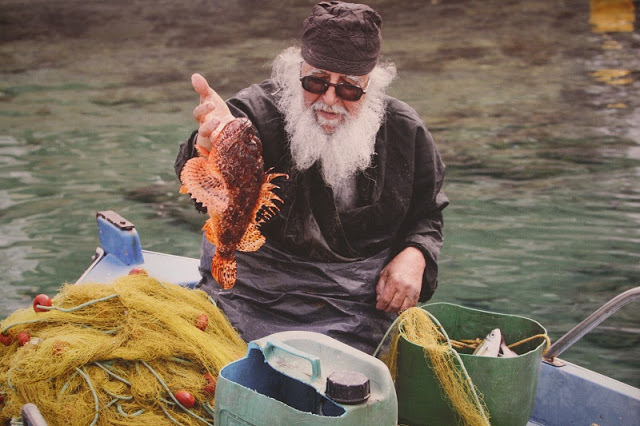 What then is the point of them?  The rules and abstinence have less to do with the stomach and more to do with the heart.  God originally made us as spirit, soul, and body, with these three hierarchically ordered:  our bodies submitted to our souls and our souls submitted to the spirit.  Now everything is topsy-turvy and inverted:  our bodily appetites rule over us, with our souls and personalities following obediently these bodily desires.  The spiritual life comes a distant third.  Fasting is meant to overturn all this, and restore us to proper balance.  By fasting from good things such as meat, fish, dairy, and wine, we train our appetites to submit.  Have you ever seen a dog with a treat balanced on its nose?  The dog longs for the treat, but has been trained by its master not to eat the treat until allowed.  Lent disciplines us to imitate the obedience of the well-trained dog, and not to eat the treat of more luxurious cuisine until allowed at Pascha. Lent says to our imperious desires, “You’re not the boss of me—the Lord is”, and demands that it submit to the spiritual life.
The fasting rules fulfill another function—that of binding us together as one family.  If simple ascetic abstinence were the sole function of Lent, then rules would not be necessary.  Each person could decide for himself “what to give up for Lent” and proceed with his own individual programme of disciplining the desires. But Christianity is not a philosophy but a family.  Nothing in it is individual and isolated.  We do not baptize ourselves when we become Christians, but receive baptism at the hands of another. We do not take bread and wine at home alone, but come to the Eucharistic assembly along with our fellows to receive it from the priest.  The New Testament epistles were mostly not written to individuals, but to churches, and the prayer the Lord taught us was not the “My Father”, but the “Our Father”.  Christianity is relentlessly corporate, and it binds us together as a single body, a united family.  That is why the Church gives a single set of rules for everyone to follow.  If one gave up meat, while another gave up chocolate and a third gave up coffee, all might benefit from their asceticism, but corporate meals would become impossible.  So the Church bids us become one, and to eat together, sharing not only the same Eucharistic Chalice, but also the same fellowship table.  The food on that table must be allowed by everyone who approaches it—hence the single set of fasting rules for all. 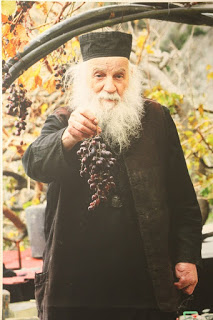 Finally, the most important thing about the Lenten fasting cuisine is that it helps soften our heart and promote love. An old book once proclaimed, “Real Men Don’t Eat Quiche”, and a wise woman I know once built on that and further proclaimed, “Real Christians Don’t Eat Each Other”.  It is tempting to be cannibalistic.  As St. Paul once warned his Galatian converts, “If you bite and devour one another, take care that you are not consumed by one another” (Galatians 5:15).  It is too easy to speak words which wound, and to destroy another by gossip, criticism, and insult.  As Solomon once taught, life and death are in the power of the tongue (Proverbs 18:21), and we often use that power for death and not for life.  St. James warned us that the tongue is a restless evil, full of deadly poison.  Man stands at the top of the food chain, and has tamed every other species—lions, and tigers and bears.  But oh my!—no one can tame the tongue.  If one has tamed the tongue, one has arrived, and is mature and perfect man (James 3:1-12).
Lent bids us tame the tongue and to love silence.  Some people when they arise in the morning turn on the computer or the television or the radio, and leave it on all day.  Most of us do the same with the tongue—when we rise, we turn on the tongue, and leave it on.  Lent bids us turn off the tongue, and only turn it on when we need to use it—and then turn it off again.  It’s hard work, just as fasting is hard work.  But only by doing this can weachieve spiritual maturity.
Lenten cuisine is ultimately not about food, like an Orthodox version of Jenny Craig.  It is about spiritual maturity, and drawing near to Christ and to each other.  It will be over soon enough, as Pascha draws ever closer.  All the more reason to use it while we have the chance.
Source: https://frlawrencefarley.blogspot.com.by/2015/03/lenten-cuisine.html
0 shares
Previous post
Next post 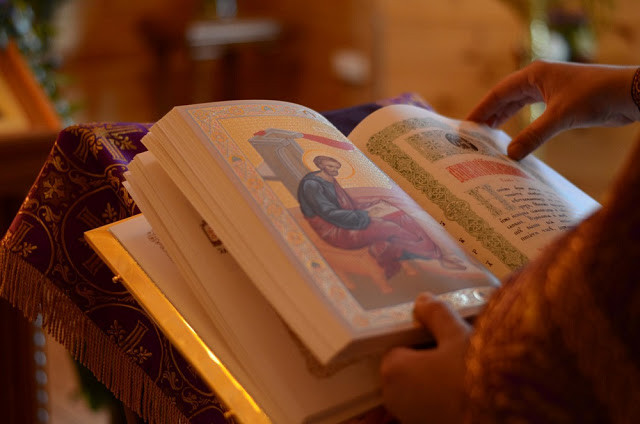 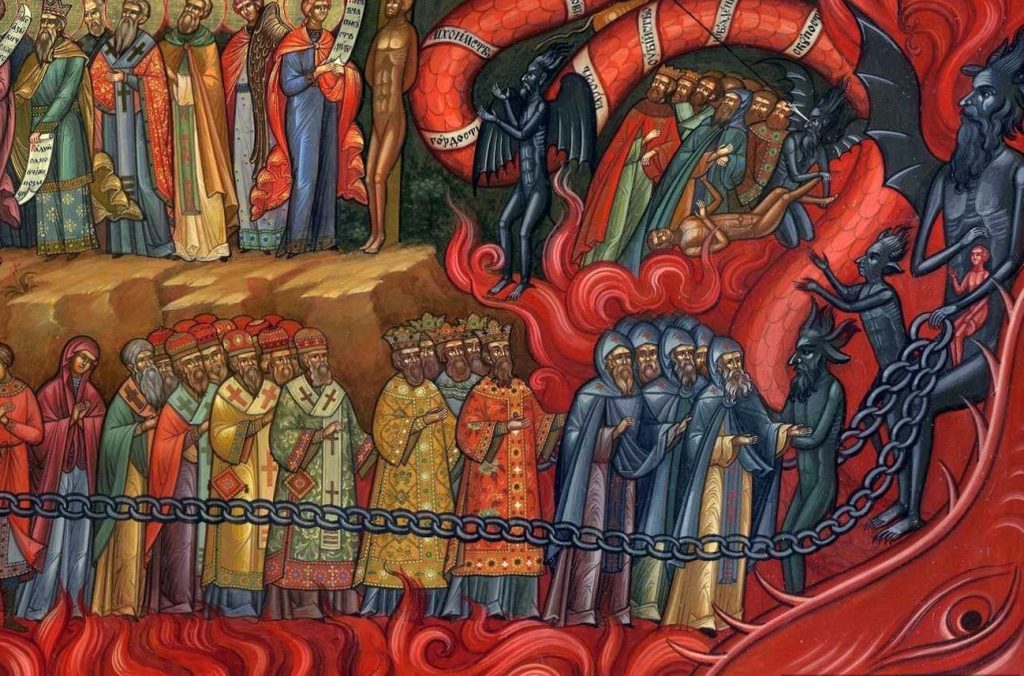 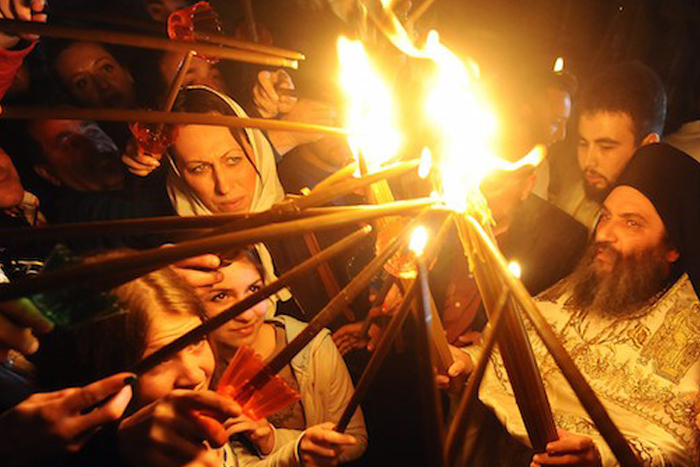