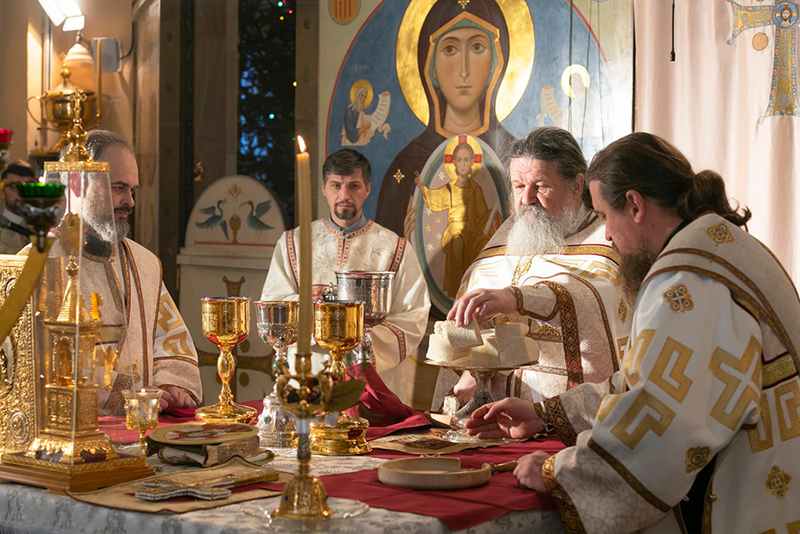 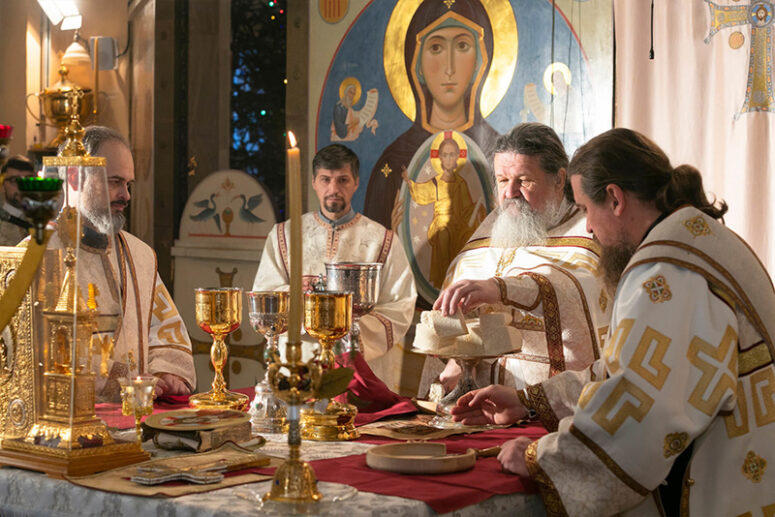 The Orthodox Church uses the term Liturgical vestments in reference to garments worn by the Orthodox clergymen and ministers exclusively while performing religious rites. Each church rank and order has its own selection of robes, with their own symbolic meaning.

Where did Liturgical Vestments Come from?

God established the wearing of liturgical vestments by the Old Testament priesthood at the time of the Exodus (see Ex. 28:4-39). The system of liturgical vestments appeared in the New Testament time together with the ranks of the clergy. Although many of them originated from everyday objects, their spiritual symbolism was always intended to remind the ministers of the high dignity and grace of their ministry.

All liturgical vestments can be divided into 4 types: vestments of minor orders (readers, altar servers and subdeacons), deacons, presbyters and bishops.

Some vestments are shared by certain church ranks. For example, a sticharion is an attribute of both minor and diaconal orders. At the same time, certain vestments can actually be varieties of the same vestment. In the ancient Church, a deacon after becoming a priest began to wear his orarion not on the shoulder, but around the neck. From that moment, the orarion began to be called an epitrachelion.

Vestments worn by altar servers and readers consist of only one element, an ankle-long shirt with long sleeves, called a sticharion. On the sides of a sticharion, there are slits with buttons, going from the armpits to the bottom. Sticharia are usually decorated with embroidered crosses.

Every time a clergyman puts on a sticharion, he does so only with the blessing of the celebrating presbyter or bishop. An altar server then takes the folded sticharion in his hands and makes the sign of the cross twice facing the synthronon. Then he approaches the celebrating priest for a blessing. Having received the blessing, the altar server kisses the priest’s hand and the cross embroidered on the sticharion, crosses himself for the third time and bows to the celebrant. Only after performing these actions (the order may vary), a church server is supposed to be vested.

The sticharion symbolizes chastity and purity of life, appropriate for the clergyman who wears it. To signify this, in ancient times it was made only from white fabric. The lace sewn onto a sticharion (a dense decorative ribbon of varying width) symbolizes the ties with which Christ was bound during the trial. The cuts on the sides of sticharia symbolize His pierced side.

Subdeacons wear an orarion, a long decorated ribbon put on crosswise over the sticharion. We will discuss the orarion in the next section, since it is primarily a deacon’s attribute.

What do deacons wear?

Deacons’ vestments consist of a sticharion, a pair of liturgical cuffs and an orarion. Merited deacons are awarded a double orarion and a purple kamelaukion (monastic deacons wear black from the moment of chirotony and are not awarded otherwise).

Cuffs are sleeves with a longitudinal slit, made of dense fabric. They are worn on the forearms, just next to the wrist. Along the slit, there is a cord used to pull the cuffs together. Cuffs are decorated with a sewn cross.

The cuffs have several symbolic meanings. First, they signify the fetters of Christ. Second, they symbolize the clergymen entrusting themselves to the Lord Christ. While the presbyter and the bishop personify Jesus Christ Himself, the cuffs emphasize that the sacraments are performed not by a person, but by God.

The orarion is the most iconic element of a deacon’s vestment. Today, the orarion is a ribbon of fabric, but originally this diaconal attribute stemmed from the towel that Christ used to wipe the feet of His disciples (see John 13:4-5). The center of an orarion is attached to the shoulder, while its ends remain freely hanging.

In the early Church, the diaconate oversaw the communal meal. In view of this, the orarion was used as a towel. Today, it is used only during worship, when a deacon calls the congregation to prayer. He then lifts up the orarion, pronouncing the litanies.

The orarion symbolizes angels’ wings and belts (see Rev. 15:6). The ends of the orarion flutter when walking, signifying an angelic flight. The feather-like fringe points towards it being an image of an angelic robe.

The kamelaukion is a headdress in the form of a truncated cone or cylinder. The Greek kamelaukion differs from the Russian one by the presence of brims at the top. In practice, the kamelaukion was used in the East to protect the head from the sun. Symbolically it depicts the Savior’s crown of thorns.

What do priests wear?

Priestly vestments consist of an inner rason, cuffs, an epitrachelion, a zone and a phelonion. A priest may be awarded the right to wear a nabedrennik, a palitza (epigonation), a kamelaukion and a mitre.

An inner rason is a thin, light inner vestment, a kind of a sticharion. Unlike deacon’s and altar server’s ‘sticharia, inner rasons are still most often white.

The cuffs worn by a priest are no different from those of a deacon. However, priests wear them over the wide sleeves of the inner rason, which is more comfortable.

The zone is usually a long piece of fabric with a tie on the back and an embroidered cross on the front. However, its appearance is not strictly regulated. The zone serves to tighten the loose inner and outer rasons and to hold the epitrachelion. 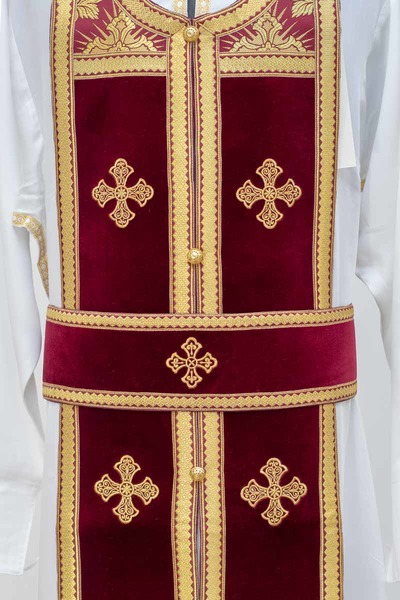 The zone originated from a leather cord that ancient monastics used to gird themselves. They wore this cord constantly, even during sleep, as a reminder of the constant need to mortify the flesh.

The phelonion is the most ancient vestment, mentioned by St Paul the Apostle in 2 Tim. 4:13. This large sleeveless cape is worn over all other robes. In ancient times, the phelonion completely covered the priest from neck to feet, but today, the front of the phelonion is at chest level. The phelonion symbolizes the scarlet robe in which the Roman soldiers dressed Christ, as well as the sackcloth and mantle that He wore during his lifetime.

The nabedrennik is a small rectangular element worn at the hip. It is used only in the Russian Church, where it is the first priestly award, usually given three years after chirotony. Symbolically, the nabedrennik represents “the sword of the Spirit, which is the word of God” (see Eph. 6:17).

The palitza (epigonation) is similar to the nabedrennik, only it is diamond-shaped. It is given to priests as a reward, but initially only bishops wore the palitza. It has the same spiritual meaning as the nabedrennik; additionally it symbolizes the edge of the towel that Christ used to wipe the feet of His disciples. 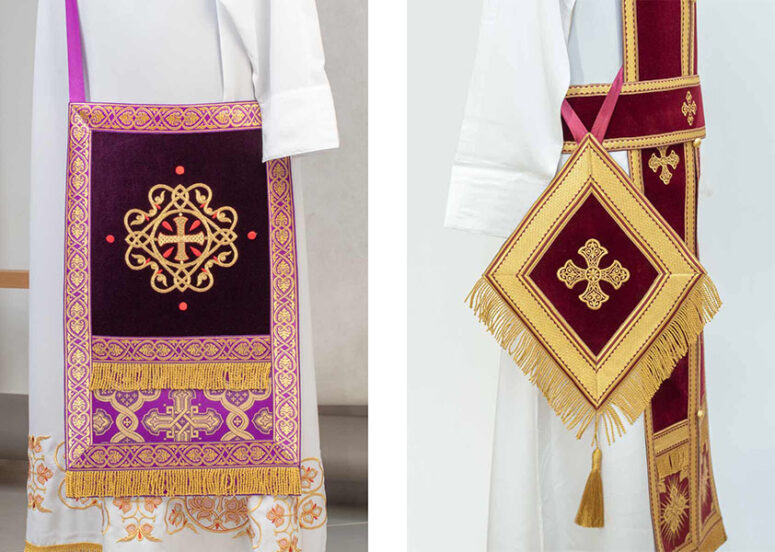 The purple (dark blue) kamelaukion is another reward granted to married presbyters. Hieromonks and archimandrites do not wear kamelaukia.

The mitre is given to an archpriest or an archimandrite for special merits. Initially, the mitre was an attribute of a bishop. The mitre is a large decorated headdress made in the image of a royal crown. On its sides, there are icons of Jesus Christ, the Mother of God, St John the Baptist, a saint or a particular feast. The top of the mitre is decorated with images of angels.

Since the priest or bishop symbolize the Lord Jesus Christ, the mitre is a sign of His royal dignity.

What do bishops wear?

The vestments of a bishop include a sakkos (bishop’s chasuble worn over an inner rason), an omophorion, a mitre, a palitza (epigonation) and a crosier.

The episcopal inner rason is virtually the same as the priestly one.

The sakkos is a loose vestment, similar to a phelonion, only with sleeves. “Sakkos” comes from the Hebrew שַׂק ‏‎ (sak), which means “a bag”. This word was also used for burlap clothes worn as a sign of grief. In the same way as the phelonion, it symbolizes the scarlet robe of Christ. 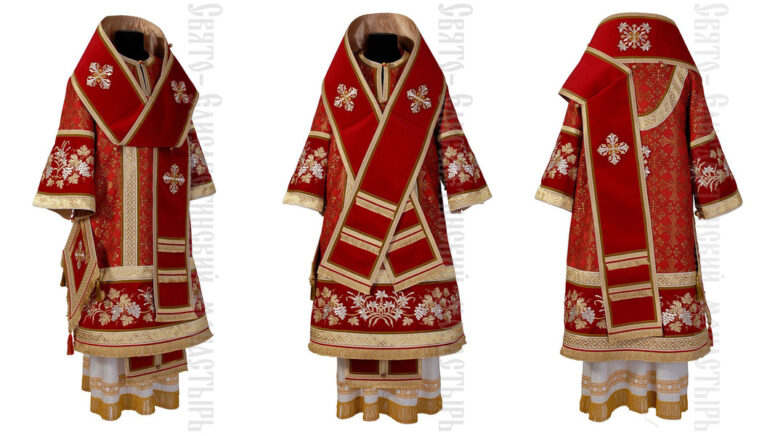 There are two types of omophoria: great and small. The omophorion is a long wide ribbon, similar to the orarion and the epitrachelion. It also has a common origin with them. The small omophorion is almost identical to the epitrachelion, except its ends are typically not sewn or fastened together. The great omophorion goes around the neck of the bishop, with one of its ends descending to the back, and the other one to the chest.

The person wearing the omophorion symbolizes the Good Shepherd carrying the lost sheep on his shoulders.

The crosier is a symbol of episcopal power over the flock and his church. The oldest episcopal crosiers were made in the form of a shepherd’s crook, but later new forms appeared (for example, the form of an inverted anchor or two snakes facing each other). On the handle of a Russian bishop’s crosier, there may be a “sulok”, a crosier grip with a small scarf, designed to prevent the bishop’s hands from freezing in winter. 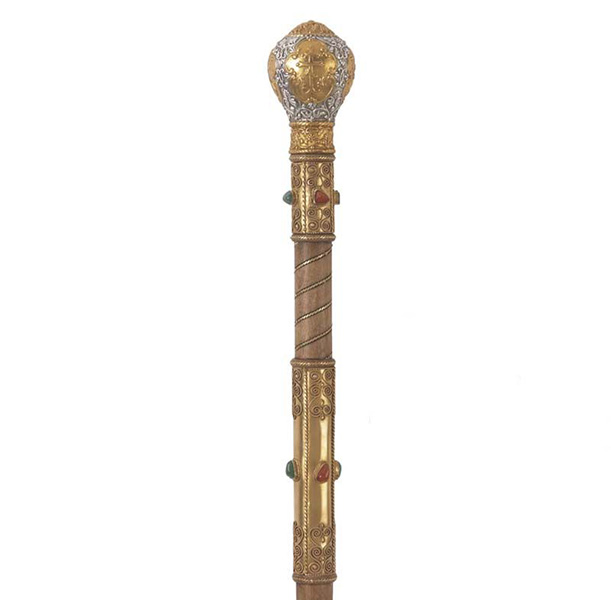 Formally, the crosier is not a vestment, but it is an obligatory attribute of a bishop during the service.

You can familiarize yourself with vestments made in the workshops of the St Elisabeth Convent by following this link. 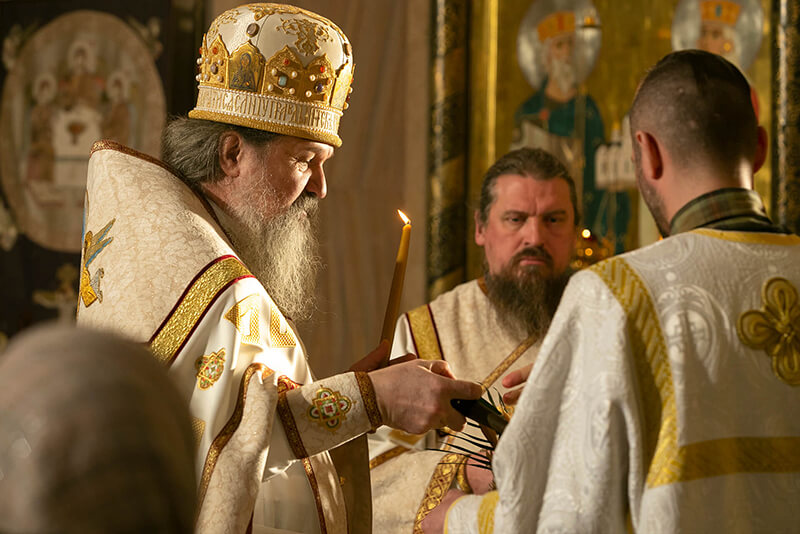 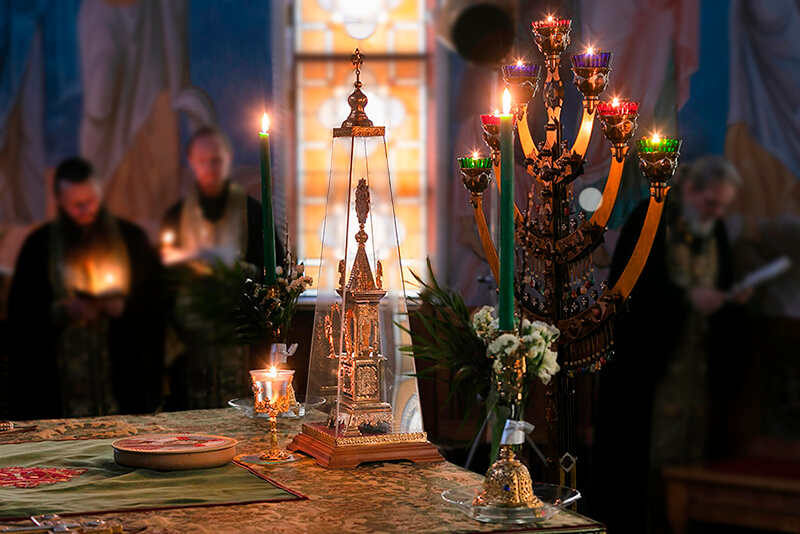 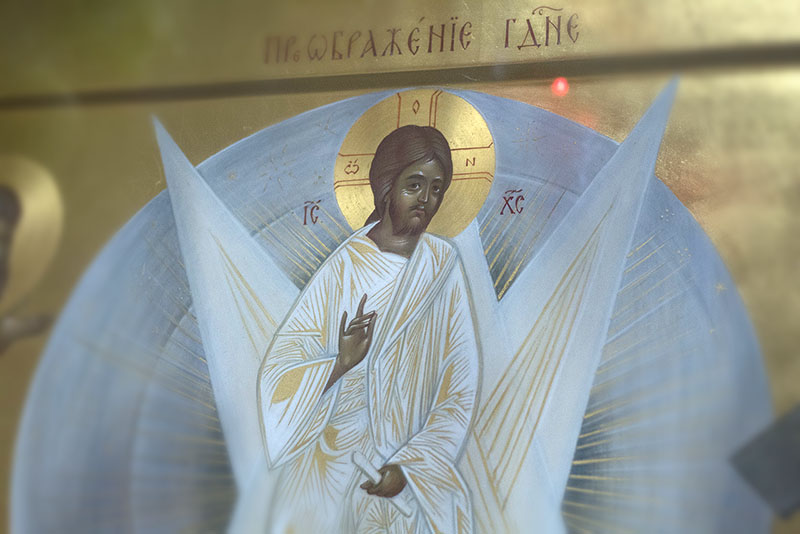