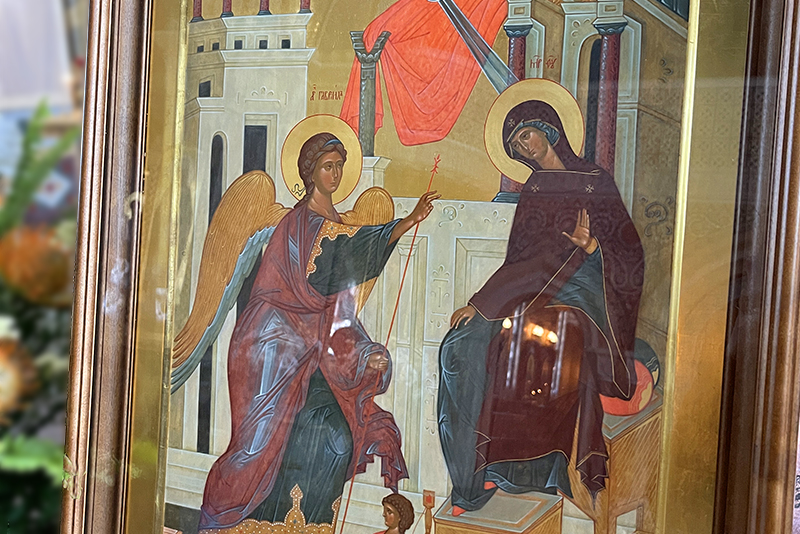 Depictions of the Theotokos — from the Simplest to the Lavish

When the third ecumenical council established the title “Theotokos” to underline the dignity of the Queen of Heaven, artists began to depict the Virgin Mary in lavish royal costumes sitting on a richly decorated throne. Naturally, all these details were included in the depiction of the Annunciation.  One characteristic example of this trend is the mosaic from the old Roman church of Saint Mary Majore. 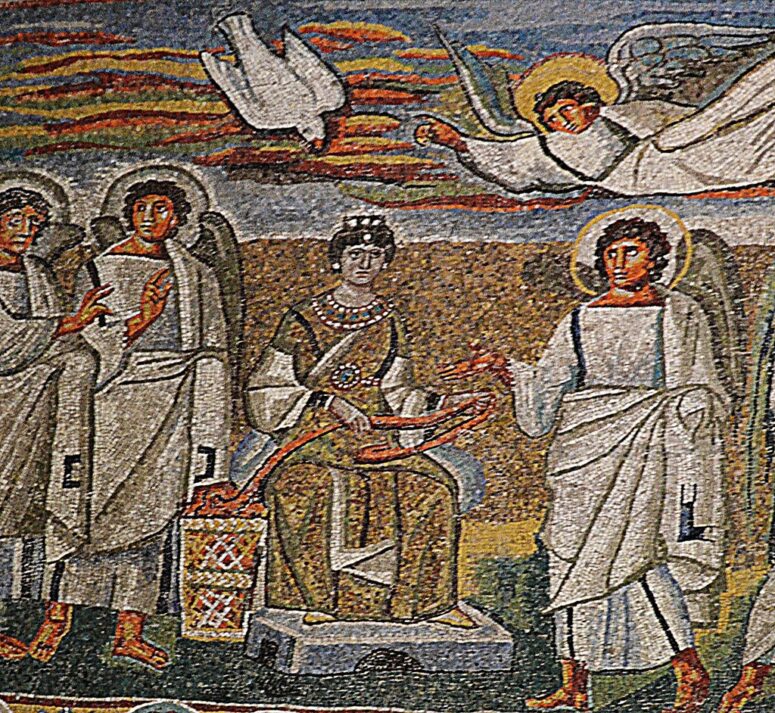 What the Purple Colour Means in Iconography

Few examples of these images survived in the Eastern Church because of the Iconoclast controversy. But the image of the Theotokos in queenly attire had few prospects of popularity in Byzantine even without iconoclasm. Byzantine painters took a fine approach to represent the royal dignity and simplicity of the Mother of God. Their solution was to use the purple colour that indicated the royal identity more than gold or diamonds.

It was possible to depict an emperor not wearing a clown or holding the royal sceptre if he was shown wearing purple shoes. Likewise, it became common to paint the Theotokos wearing simple clothes common for Mediterranean women of her time, but to always colour them purple, indicating to viewers her royal status.

There was also another detail where purple played a major role. In icons, the Theotokos was often shown with a spindle and wool. This detail did not appear out of nowhere. First, it was an allusion to the apocryphal writings in which the Theotokos was weaving a woollen curtain for the Jerusalem temple while living in the house of Joseph. Another line of interpretation came from church hymnography. For example, the Great Canon of Repentance of Saint Andrew of Crete has these lines dedicated to the Theotokos: “The spiritual purple of Emmanuel was woven inside thy womb as if from scarlet silk, O Most-pure Virgin. Therefore we honour thee as truly Theotokos.” – As we see, the purple woven inside the womb represents the mystery of Christ’s conception at the moment of the Annunciation.

The Annunciation Is a Dialogue

The feast of the Annunciation commemorates the coming of the Archangel Gabriel with the good news to the Virgin Mary and her acceptance of this news. The challenge for the iconographer is how to convey this conversation in an icon. Perhaps the easiest solution is to write captions. An example of this approach is the mosaic frescoes of the Church of Saint Sophia of Kiev (some of the oldest depictions of the Annunciation in this part of the world). A column before the altar shows the figure of the archangel bringing the good news complete with the caption in Greek: “Rejoice, Virgin Mary, you have found favour with God.” On the opposite side of the column is the figure of the Theotokos under the caption saying “Behold the handmaid of God.” 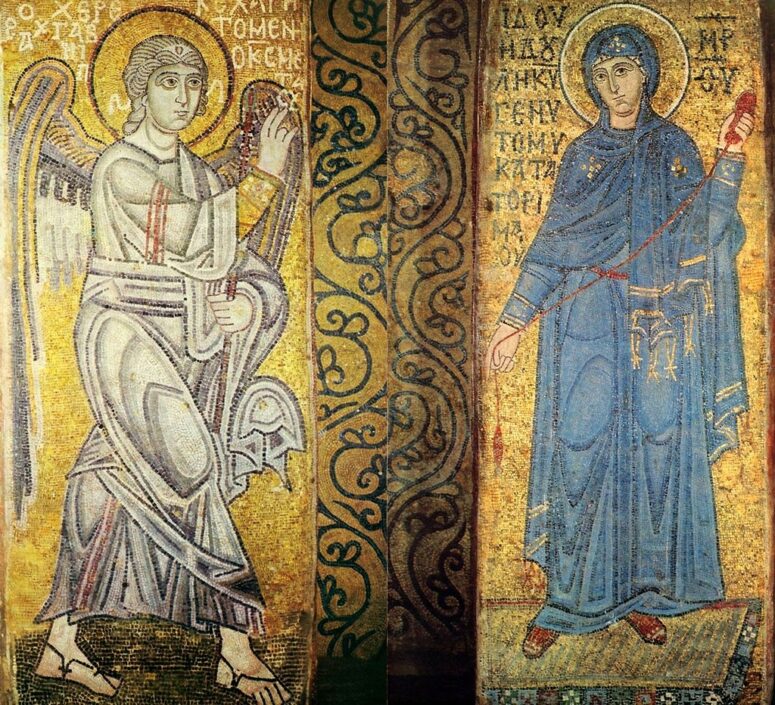 However, it may be news to many that the conversation between Mary and the Archangel has also been portrayed without the use of captions. It should be remembered that Christian culture evolved from the tradition of Ancient Rome and Greece. Its elements – cleared from the traces of Paganism – were incorporated into Christian iconography.

The icons of the Annunciation are no exception in this regard. In them, the Archangel Gabriel is depicted with his hand extended towards the Theotokos, fingers folded in a distinct way that represents a sign of a direct quote used by the ancient orators. The Holy Theotokos, too, is painted making a gesture that means her acceptance of the news from the Archangel.

The Immaculate Conception of the Son of God

Icons depict the visible and invisible worlds and contain direct and symbolic images. Iconographers represent the conversation between Mary and the Archangel, and also the conception of the Son of God. At the top, many icons represent the world of heaven – typically as a sphere. A ray of light is emanating from the sphere toward the Theotokos. Some iconographers also depict a dove, the most widely known symbol of the Holy Spirit.

Along with space, many icons also represent time. One of the oldest Russian icons of the Annunciation, the Icon of the Annunciation of Ustug from the 12th century, shows the archangel bringing the good news and also an image of the Son of God. In this wondrous icon, Christ is present inside the sphere of heaven and also in the womb of the Theotokos as an infant. 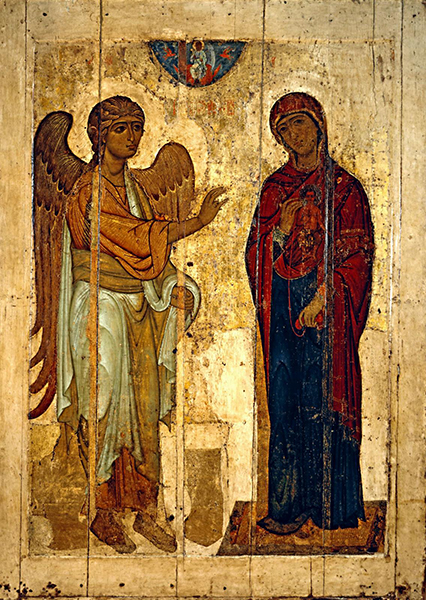 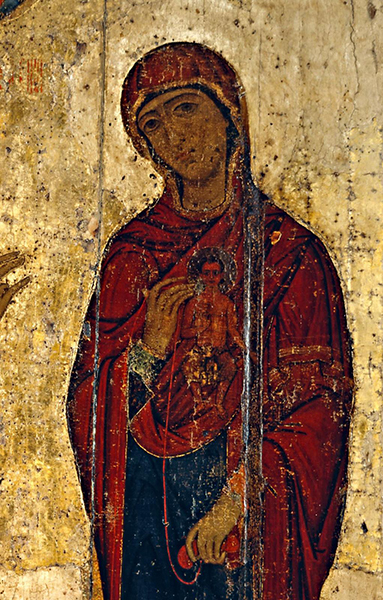 A Simple Narrative Over Time Was Supplemented with Details

At times, this simple narrative was supplemented with numerous details, drawn mainly from the Gospel and the church hymns. For example, some icons of the Annunciation depict a wall or enclosure with a tree growing behind it. That is a representation of the Garden of Eden from Solomon’s Song of Songs. This old testament symbol is seen as reminiscent of the Theotokos, as reflected in the church hymnography. “Paradise is locked and bolted, the spring is sealed by the Spirit of God; the wisest of the wise chants, like the garden of life, Christ appears in You”.

Some art scholars who are too far from the Church may be prone to misinterpreting the icons or attributing to them non-existent messages. Good knowledge of Orthodox worship and liturgical texts can guard us against such misunderstandings.

Many icons of the amid their great variety cover themes that go beyond the event of the Annunciation. For example, some depict the conversation of the Theotokos with the Archangel at a well (or the pre-Annunciation, described in the apocryphal writings). An example of an icon depicting this episode is shown below.

Over time, iconographers have emphasised a wide variety of narratives, details and accents. It was not our purpose to provide a full description of encyclopaedic details.

Yet we should never lose sight of the essence of the main event. The depiction of the Annunciation is more than a graphic representation of the Gospel account. It is a great example of the synergies between man and God. God will respect our free will, and only our voluntary acceptance of His will can yield good fruit, like the Most Holy Theotokos obeyed the will of God by saying, “I am the Lord’s servant. May your word to me be fulfilled.”

Translated by The Catalogue of Good Deeds
Source: https://pravlife.org/ru/content/samye-vazhnye-detali-v-ikonah-blagoveshcheniya-ot-evangelskoy-prostoty-do-carstvennoy 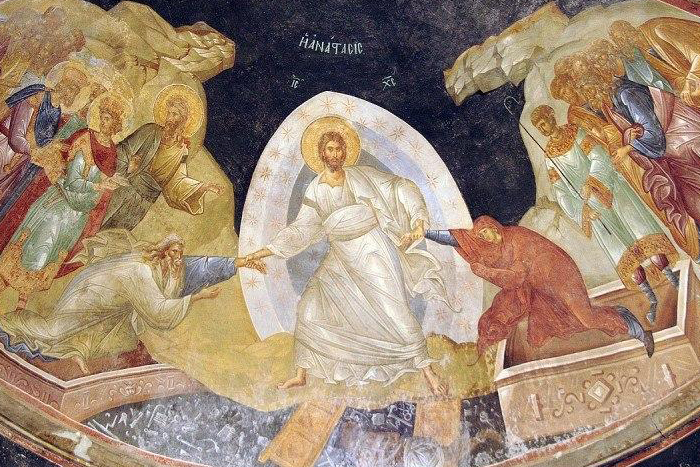 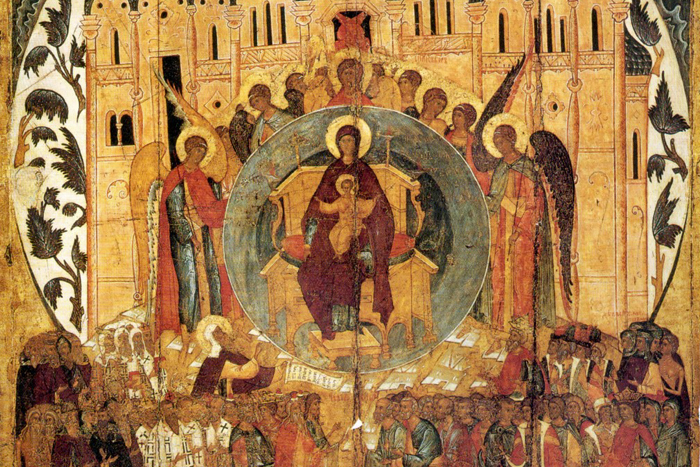 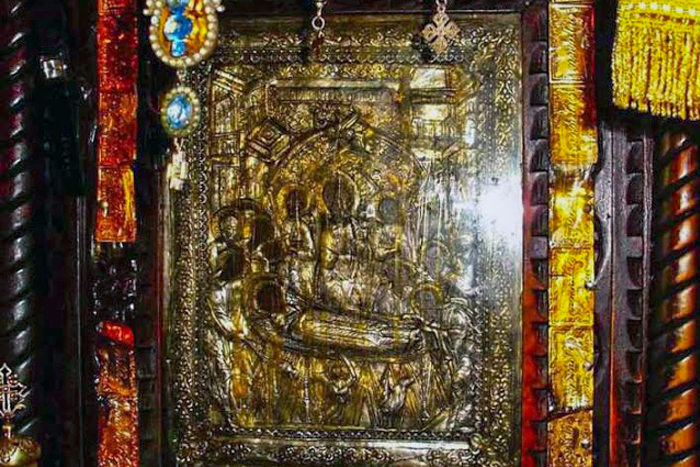