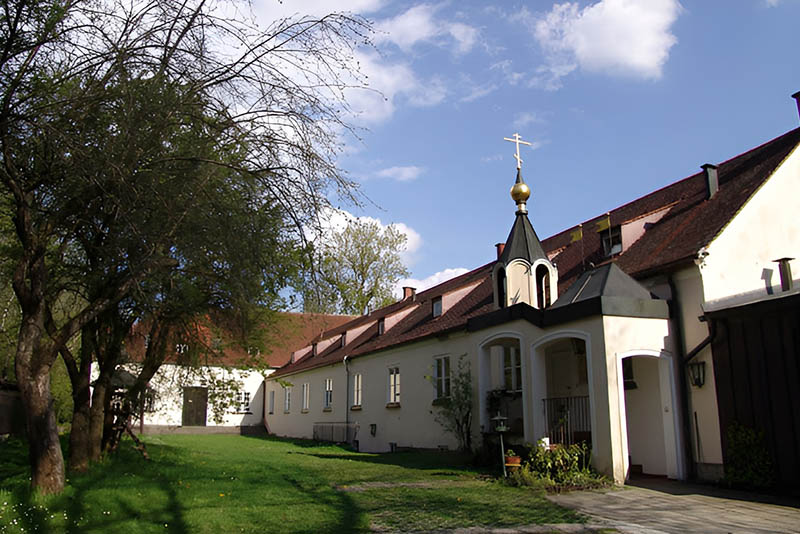 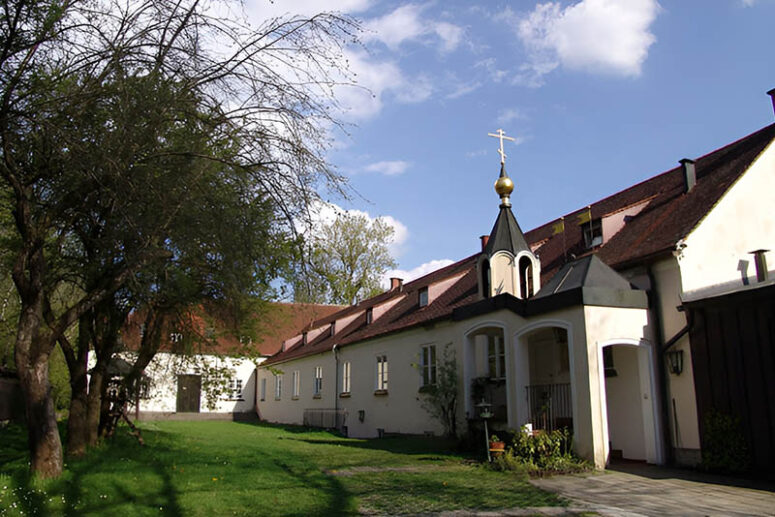 Daily life in the only men’s monastery in Germany, dedicated to St Job of Pochaev, headed by His Eminence Archbishop Mark (Arndt) of Germany. Monk Joseph (Bandmann), an Orthodox German, reports on life in the monastery he has lived in for nine years.
On the left is a meadow, pond and the white walls of Blutenburg Castle. On the right are quaint German houses of Pasing. Between them is the Monastery of St Job of Pochaev, which adheres to the Mt Athos monastic rule.
The monastery was founded in 1945 by former residents of Pochaev Monastery in Czechoslovakia, who lived there during wartime years and decided to move to Allied territory to escape the Soviets. In its better years, the monastery had 40 residents, but by 1980, only the retired Archbishop Nathanael and a reader remained.
Everything changed in 1980, when Bishop Mark (Arndt) arrived (now Archbishop of Berlin and Germany). Vladyka had before then made many visits to the monasteries of the Holy Mountain and Serbia. He and a few other enthusiasts founded a monastic community following the Athos rule. In the Monastery of St Job of Pochaev, Vladyka Mark also established the same practices of the Holy Mountain of Athos. But the spirit of Pochaev lives on, both in the obediences, the priority of publishing work, and also in singing. 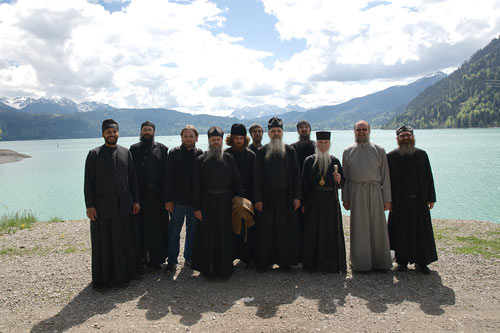 The monastery now houses ten residents, all of whom were received by Vladyka Mark, its abbot. Photo: The brethren during a trip to Walchensee, an alpine lake not far from Munich. 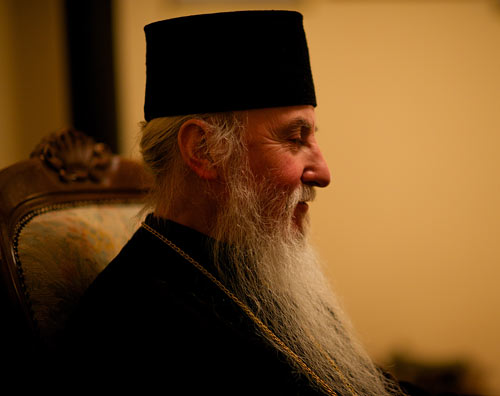 Archbishop Mark lives in the monastery, where his office is. He regularly takes the monks’ confessions and rises every day with them all; daily services begin at 4 am. He also serves in the cathedral, visits parishes scattered throughout all of Germany, and makes regular visits to Great Britain and the Holy Land, and recently participated in a session of the Holy Synod in Moscow. 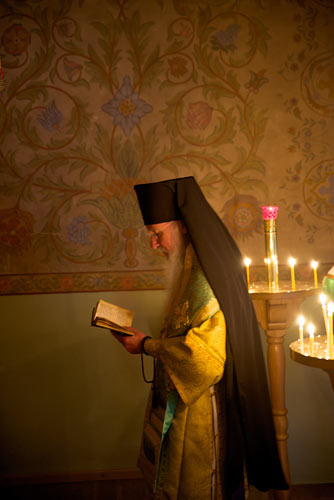 Vladyka prefers to serve as a priest in the monastery. He would even wear the phelon and minor omophorion. 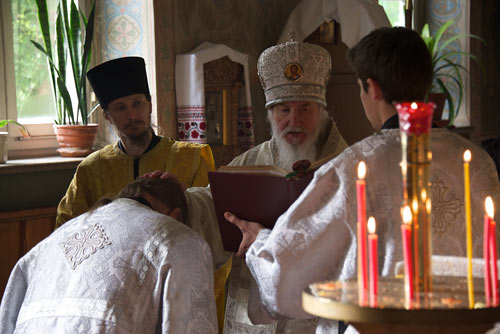 On holidays he serves as a hierarch. 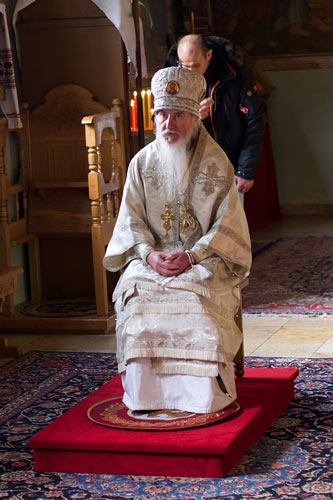 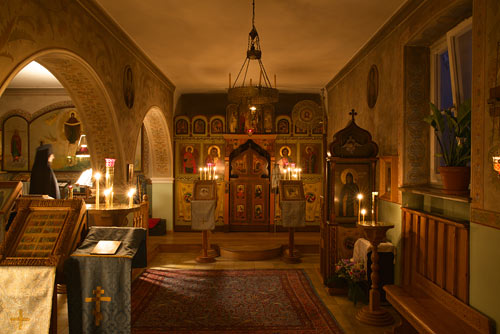 Church is the center of monastic life. Divine services are strictly performed. The church is usually bathed in twilight, electric light is only turned on in the altar, the rest of the church has candlelight. 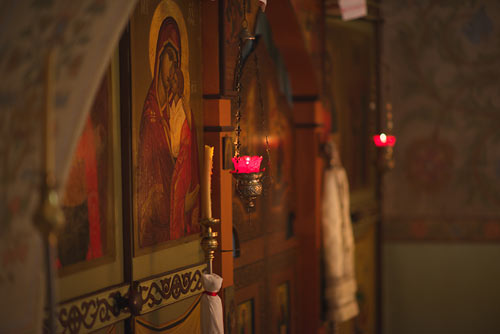 According to tradition, before the first daily service and after the end of the last service of the day, all the monastics and pilgrims venerate every icon in the church and ask the blessing of Vladyka and forgiveness from each other. Archbishop Mark’s place is the “stasidia” at the iconostasis before an icon of St Job.

Great Friday. The Shroud of Christ. 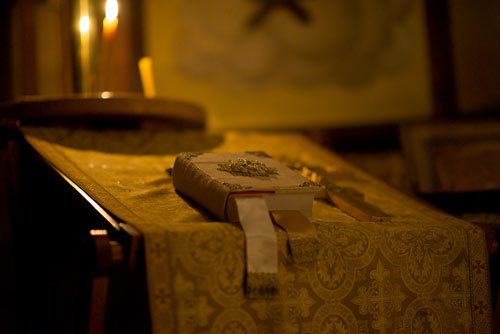 Confession is usually made before the left side of the altar, on the kliros. The Gospel book has of an unusual white cover, which has a joyous look on the analogion.

A fresco of St Job. In the darkness, during the midnight office, the holy father looks severe, but in the light of Liturgy one can see his benevolence. 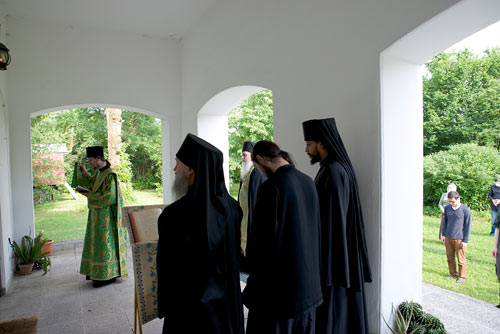 Litiyas are served outside, before the narthex. 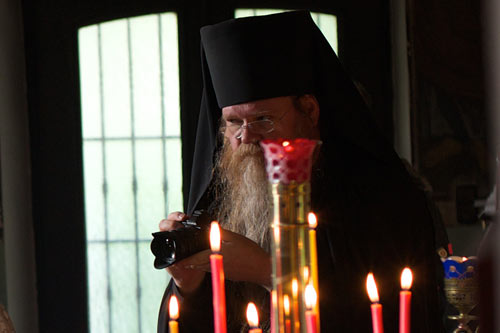 Bishop Agapit of Stuttgart, Vicar of Archbishop Mark, who lives at the monastery. Even before the monks moved to Munich, he came as alayman to the community of Hieromonk Mark in Wiesbaden, where he had a striving for the Athonite way of life. He was present at the resurrection of the Munich monastery and the publication of the Orthodox calendar and Vestnik, which actually began in Wiesbaden; Hieromonk Mark typed the calendar, which was later developed by Novice Alexander (Gorachek), who later became Bishop Agapit. 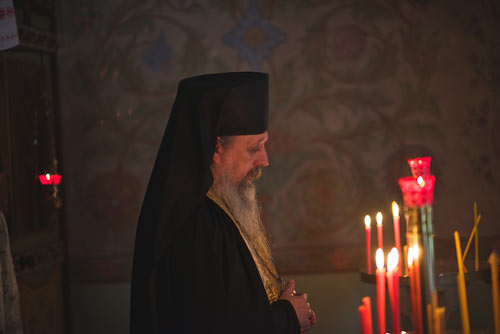 Hegumen Evfimy (Logvinov) was as a layman a restorer in the Grabar Studios, which is now once again Marfo-Mariinsky Convent, which is closely tied to Holy New Martyr Grand Duchess Elizaveta Feodorovna. He came to Munich, became a novice, then hieromonk, and now serves at the monastery every day. For twenty years he has maintained correspondence with believers in Russia, represents the monastery at conferences in Russia, where he is often a lecturer.

The administrative offices are located along the main hallway. From here you can enter the church (at the end of the hallway), and a staircase leads to the monastic residential cells on the second floor. 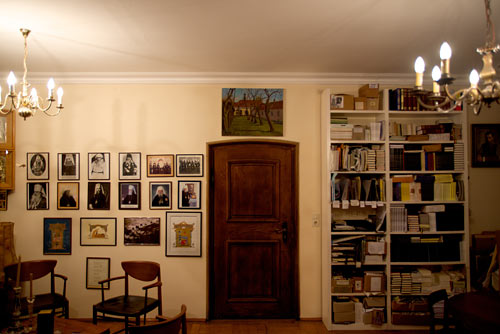 Vladyka Mark’s office at the Monastery of St Job. On the wall are photos of the First Hierarchs of the Russian Church Abroad. Under them are miniatures depicting scenes from the life of St Mark the Ascetic, Vladyka’s heavenly intercessor. Also on the wall are poems written to Vladyka Mark by children parishioners. 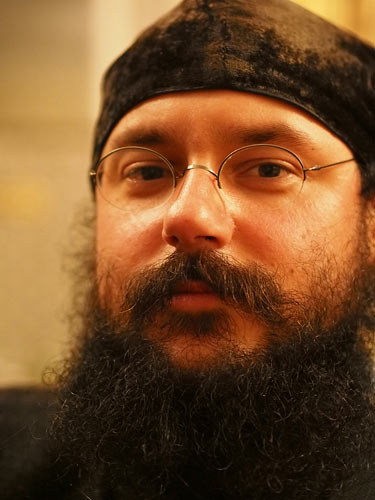 Monk Joseph has been at the monastery for 9 years. He has many obediences: he leads the choir, teaches at the Cathedral school, and drives the car. He loves photography, and chronicles the life of the monastery.

Publishing is a Pochaev tradition. The original Pochaev monastery printed a great deal of Orthodox literature, which was crucial for Western Ukraine, which had long been under the yoke of the Unia with the Roman Catholic Church. Fr Joseph also publishes German-language material. 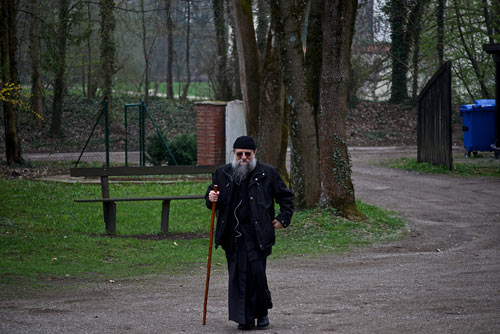 Monk Philaret (Labi) grew up in France. He has been at the monastery for over twenty years. He is a strict monastic with a twist of French humor. His obedience is to publish books in Russian. He took over the publishing task from Vladyka Agapit. He had led the monastic choir for many years, a task he handed over to Fr Joseph. 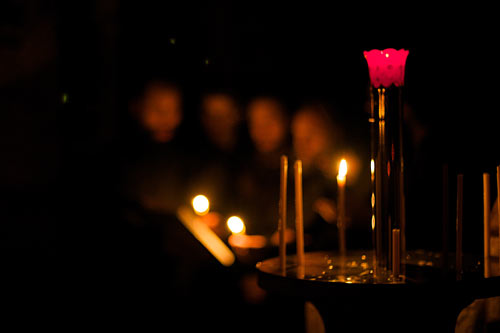 The choral style is very monastic–quiet and lyrical, without noise and added effects, reminiscent of the style of Pochaev Lavra.
Fr Joseph even takes photos on the kliros. Photo: Novice Seraphim reads the hours. 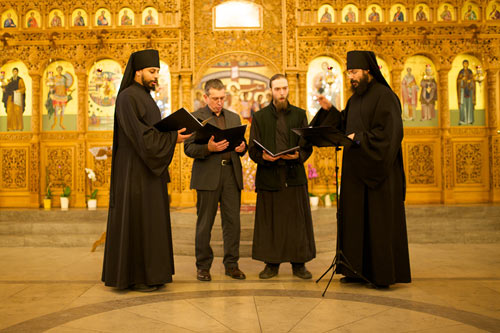 Every year in Munich, a church festival is held on the Sunday of the Triumph of Orthodoxy. A different church hosts it every year. This year it was held at Munich’s Church of All Holy Patriarchs of Constantinople; next year the Russian Orthodox Church will host it. Photos from left: Monk Philimon, the monastery’s baritone and teacher of the Law of God in the Cathedral school, who also has many other duties at the monastery.

Monk Amphilohije in the monastery garden. Germany has a great many landscapes worthy of the brush of the Russian painted Nesterov. 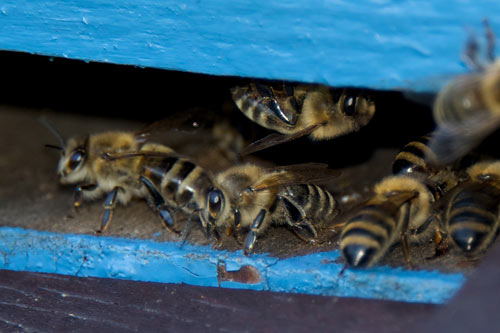 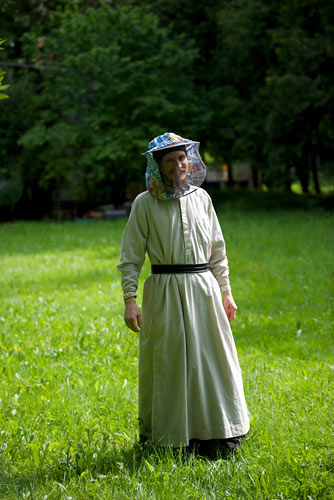 … and intoning a litany. 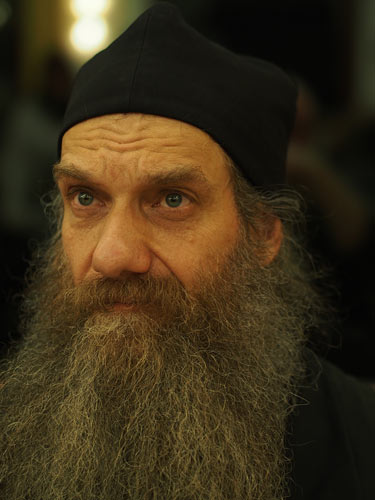 Monk Meliton is responsible for the monastery’s incense. He loves experimenting with aromas, so his studio is filled with various oils, fragrances and herbs. 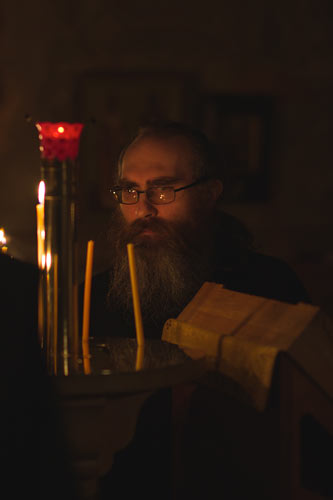 Novice Johann is likely the first monastic visitors see at services. He tends to the candles; no easy task: daily services begin at 4 am. 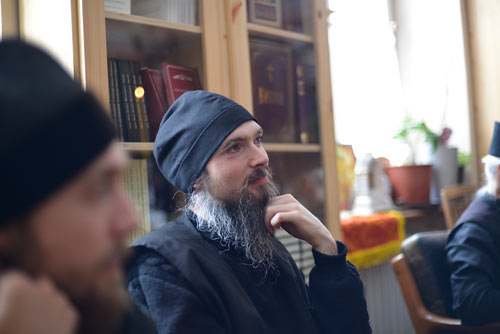 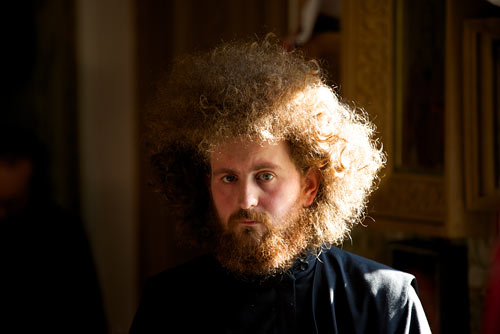 In the refectory. There are two meals at the monastery every day, but during lent, only one, but they do have tea. The cuisine is delicious, with great variety of dishes. By Vladyka’s blessing, for monastics and guests who are late, portions are set aside. 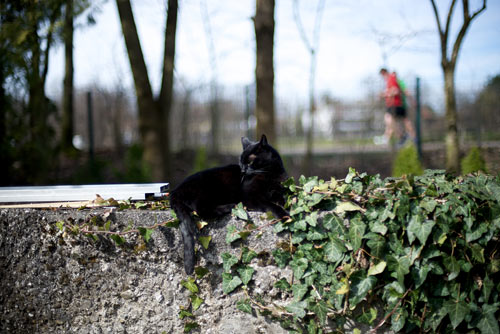 The monastery cat–black, of course. Sitting on the wall, he turns away from this world.

The Russian-style cupolas are not uncommon in Bavaria. This church also has “onion domes” on the bell tower. 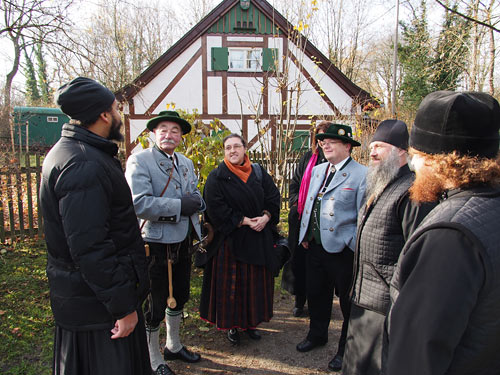 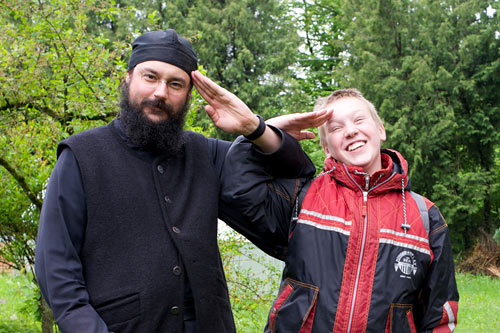 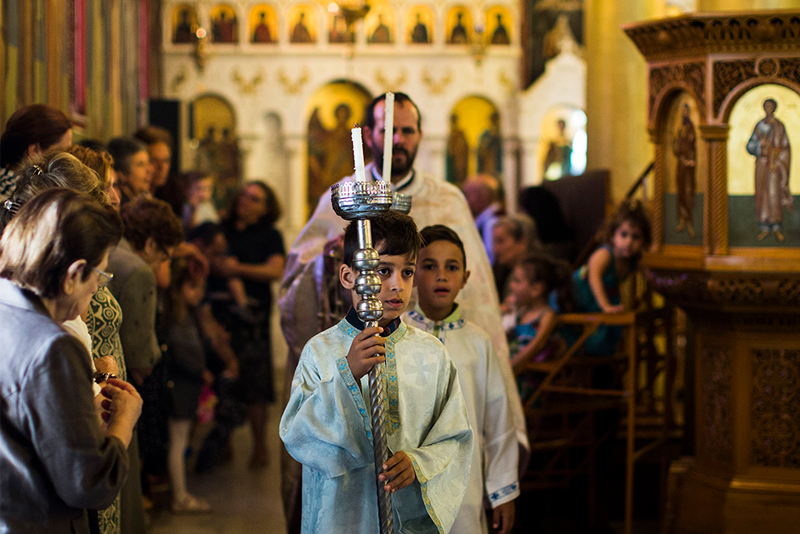 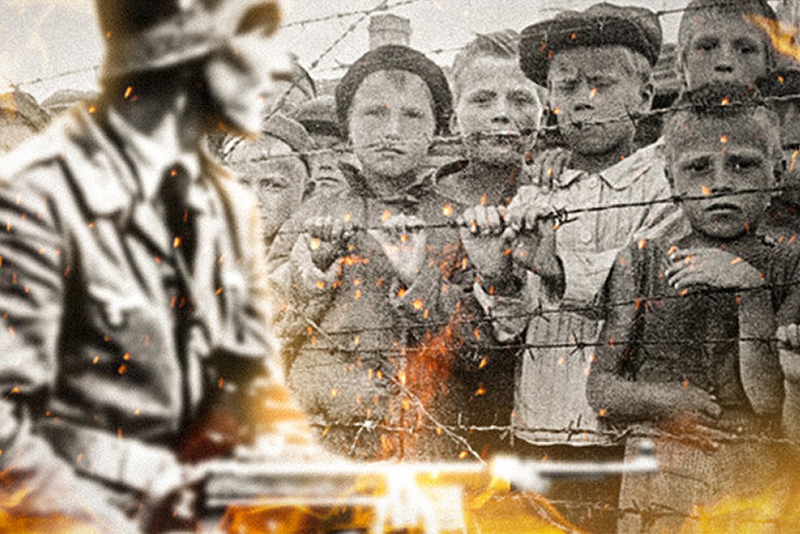 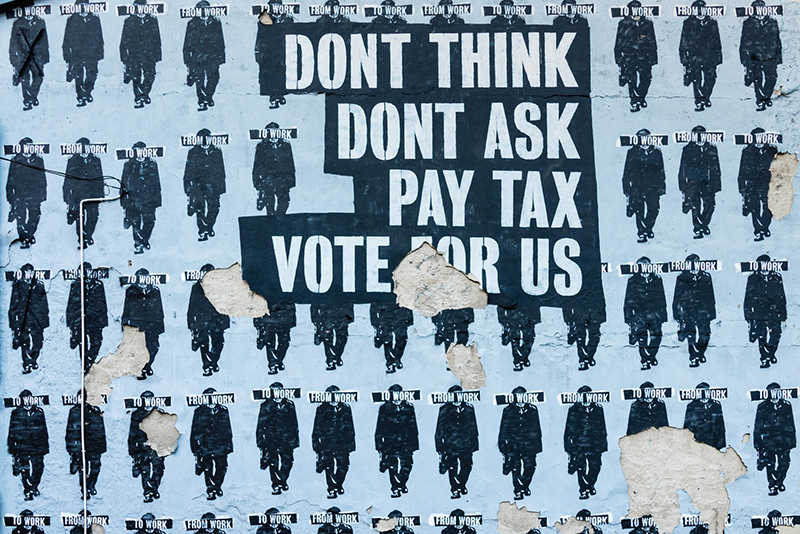