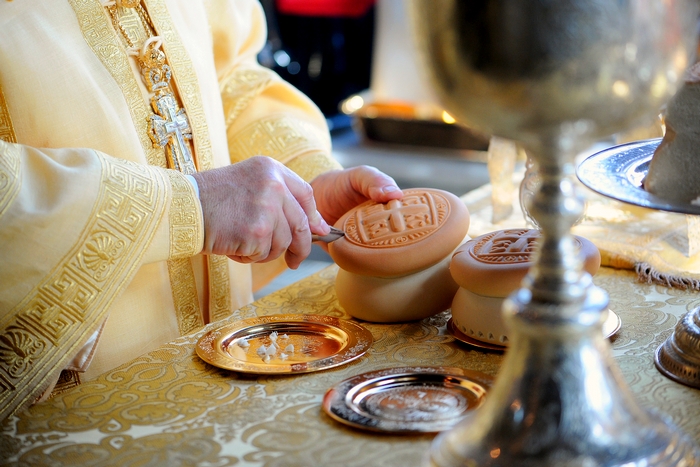 “And there will be one flock and one shepherd” (John 10:16).
Since ancient Apostolic times the Liturgy was served with one Bread (and one Chalice) following Christ’s example. This tradition remained in the West. In the East, according to Archimandrite Cyprian (Kern), “The Byzantine Empire weaved a lot of theological and mystical patterns in the liturgical cloth”. In particular, the best bread was chosen as the lamb, while small particles were taken out from all the other breads and placed on the diskos near the lamb in memory of those who had brought those breads (such liturgical tradition exists since 11th century; before that time all the other breads were just raised with pronunciation of the names of people who brought them).

These small particles symbolize our gifts and sacrifices to God, and first of all the sacrifices of the holy martyrs, who fully sacrificed themselves to Christ. These particles are next to the most perfect Sacrifice and thus they become blessed, just like the sacrifices of saints are blessed by Christ, although they do not become the Body of Christ. The thing is, the saints’ sacrifices are not equal to the Sacrifice of Christ and are imperfect in comparison with His Sacrifice. Even the service of the Most Holy Theotokos, Who is more honorable than the Cherubim, and beyond compare more glorious than the Seraphim, cannot be compared with the sacrifice of Christ. Only Christ died willingly (and this is why His death is redemptive for us), while the Mother of God and the saints and martyrs died because of their nature. And the saints are glorified not because of their essence, but due to God’s grace. In fact, Christ is the only One, Who is God by His essence. This is why it is forbidden to partake of the Holy Communion with the particles taken out in honor of saints, because they are not equal to the Body of Christ. The rite reflects dogmatics and it has always been this way. 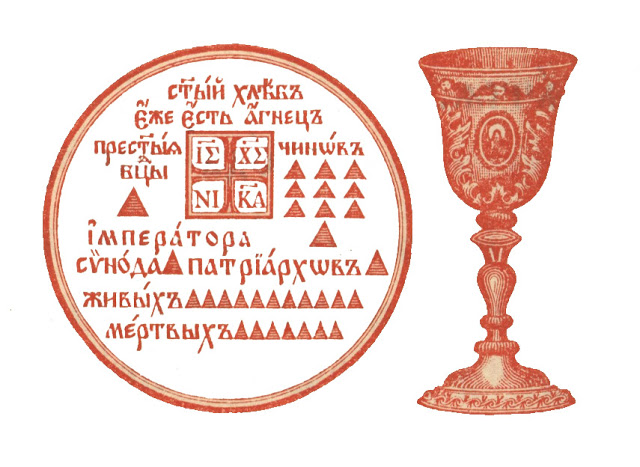 An opposite statement saying that these particles turn into the Body of Christ is officially confessed by the uniates since 1720. However, it is nothing more than the reflection of the catholic dogmatics, which denies the uncreated nature of the Divine energies, in accordance with Barlaam of Seminara, a scholar and academic. According to the catholic teachings, the saints united with God through the flesh, which means that no direct union with God occurs. Consequently, no salvation occurs as well. Otherwise, it is necessary to accept that the saints unite with God by their nature, which is an example of pagan polytheism. Paradoxically, however, the impossibility of direct union with God and the union with God by nature are the same things from the philosophical viewpoint. In fact, platonism, with its radical division between material and spirit (dualism) and their eternity, and neoplatonism combined with aristotelianism and its emanation of deity, are equal and accept the same substance of being. This substance is deity-cosmos-body, beginning with the thin heavenly level and ending with heavy terrestrial level (this leads to dissolving the border between the Creator and the creation, to depersonalization of God and to denying the fact of creation out of nothing).
Thus, there is only one choice: either to accept that these particles do not receive any blessing at all (why are they needed then? – actually, there are none in the Latin rite), or to accept that all these particles turn into the Body of Christ. Ancient pagan platonism – that is what is behind the unjust belief in transubstantiation of the proskomedia particles.
We partake of the Holy Communion from the single Sacrifice of Christ, not from the sacrifices of saints. We become of one blood and body with Christ and then we become one body – the Church of Christ, which is built on the blood of the holy martyrs, which emulates the Golgotha Sacrifice. Nevertheless, there is only one foundation, which is Jesus Christ Himself (Ref. 1 Corinthians 3:11). We cannot partake of the Holy Communion from the blood of saints. We can only ask them to pray for us before God. This is what the dogmatic teaching of the Church says about the communion with saints. The particles become blessed but they do not transubstantiate into the Body of Christ. It symbolizes that the sheep partake of the Holy Communion from the One Shepherd, but not from each other. “For we, though many, are one bread and one body; for we all partake of that one bread” (1 Corinthians 10:17). 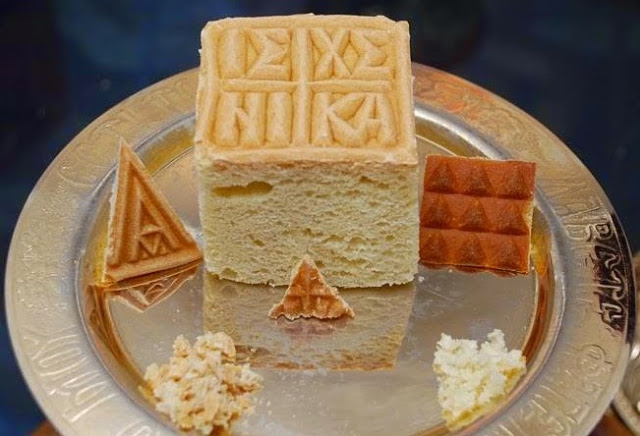 To provide an example we can mention the raising of prosphora blessed in the name of the Mother of God during the rite of Panhagia. The prosphora is blessed, but it does not transubstantiate neither into the Body of Christ, nor into the body of the Mother of God. Those who partake of it receive blessing by the prayers of the Mother of God, but of course this is not considered to be the Holy Communion.
So, the particles taken out during the proskomedia for all the members of the Church are placed on the diskos and are blessed during the Liturgy. Because of the power of the foretype, this blessing spreads on us all too, because the diskos and the particles on it are nothing else but the image of the whole Church. “But let us see, how can we see Jesus Christ Himself and His Holy Church in this Divine image and the actions of the holy proskomedia. He is in the center under the guise of bread. The Mother of God is at the light hand of Christ under the guise of a particle. The saints and angels are at His left hand. All the pious believers who have faith in Christ are placed below. There is a great mystery: God among people and God among gods, which received their divinity from God, Who incarnated by their nature for their sake. Here we can also see the Kingdom and how eternal life is organized: God is near us and He lets us be a part of Him…”
Not only the particles are blessed, but also the prosphoras from which these particles have been taken out. This is done so that faithful people partake of them and receive blessing as well. In ancient times, antidoron was taken by those people, who did not partake of the Holy Communion during the Divine Liturgy.
The whole Divine Liturgy is full of deep theological symbolism and includes all the mysteries of the Divine economy of our salvation, so that the children of the Church receive the Divine knowledge in following Christ’s commandment to do this in remembrance of Him (Luke 22:19).
Translated by The Catalog of Good Deeds
82 shares
Previous post
Next post 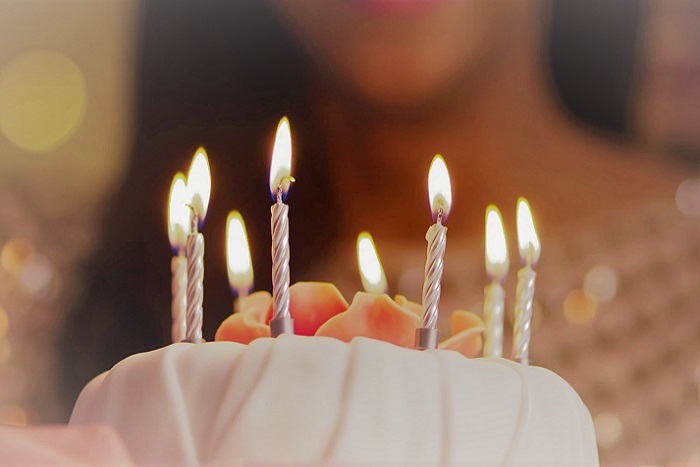 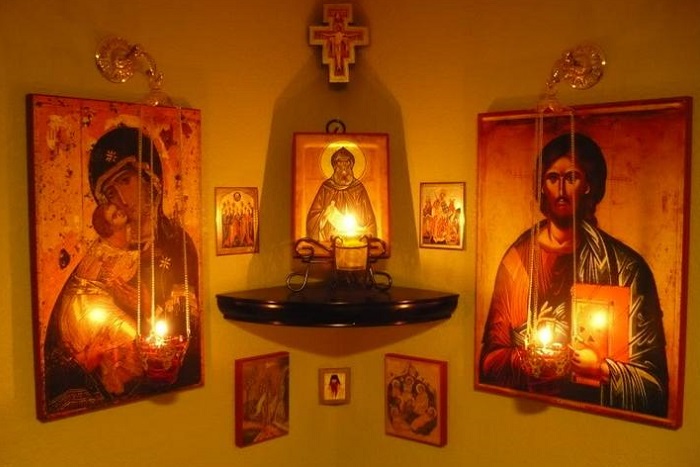 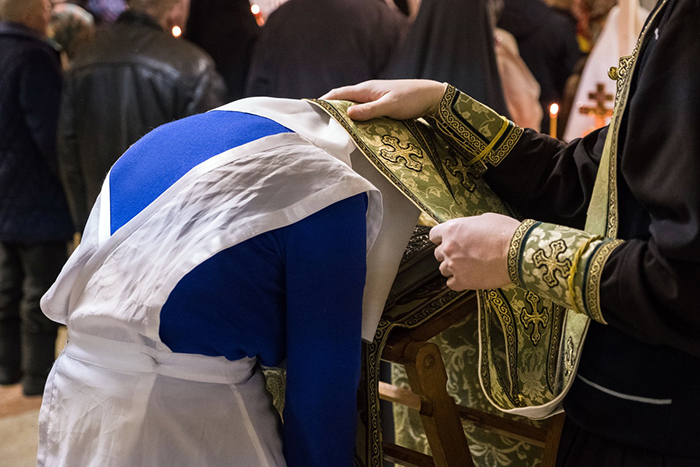