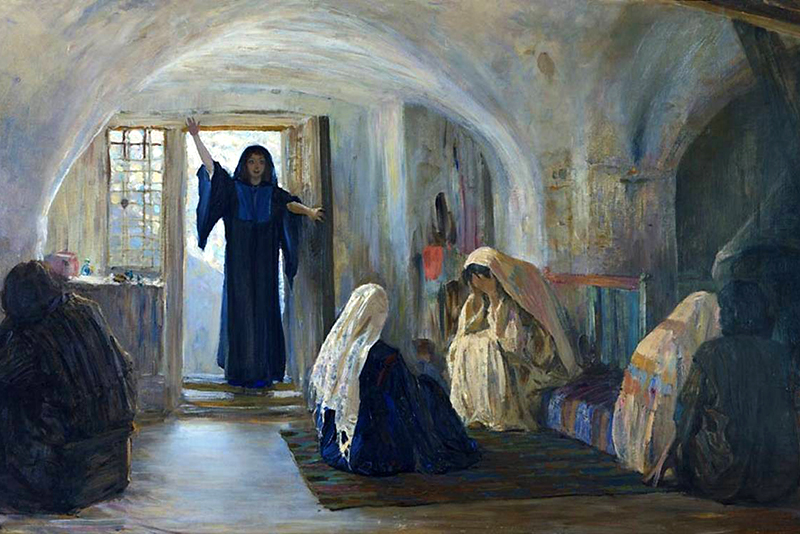 After the Ascension of Christ, Mary Magdalene was among the woman who was praying together with the apostles and the Mother of God in anticipation of the Holy Spirit to come down. The Church tradition preserved the story about her feats made in the capital of the former empire.

First of all it is important to note that when Mary came to Emperor Tiberius I, she gave him a red egg and said the words we say each year on the day of Easter: “Christ is risen!” Then she told him the truth about the crucifixion of Christ and His sufferings. The tradition of giving the emperor some fruits or eggs was quite usual at that time. And today we continue this tradition on the day of Easter. However, some Church historians state that the Roman emperor already knew from Pontius Pilate everything about the events which had taken place in the Canaan, and heard from the people about the Resurrection of Christ. It is assumed that the words of Saint Mary made the emperor offer the Roman senate to include Christ into the list of Roman gods. An offer that was naturally rejected.
The Saint Myrrh Bearer also knew Apostle Paul, and it is quite possible she helped him in his missionary work. That is why he wrote later in his message to the Roman people: “Greet Mary, who bestowed much labour on us” (Romans, 16:6). Later Saint Mary lived in Ephesus, where Saint John the Apostle worked on his version of the Holy Gospel. Moreover, his book gives more details about the resurrection of Christ and the episode of His appearance to Saint Mary Magdalena. The life of Saint Equal-to-the-apostle Mary ended there, in the city of Ephesus. 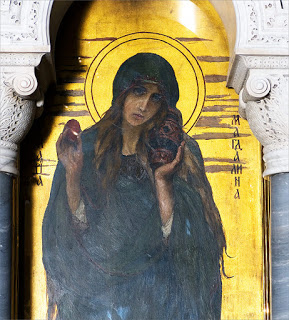 With acceptance of Christianity, people of Rus began to honor Saint Mary as well. There is a wide range of various iconography presenting her. The image of Saint Mary can be seen on the icons depicted during the passions of Christ: the Crucifixion of Jesus Christ, Descent from the Cross, Burial of Christ, the Myrrh Bearers and on other similar icons. One of the Moscow icons of Saint Mary depicts her with a white cross in her right hand and a gold alabaster in the left one. 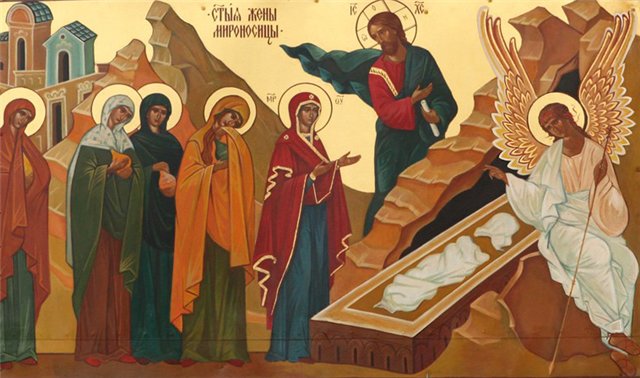 There is also an interesting story about the relics of the Saint Myrrh Bearer. It seems that during the crusades they were taken to Rome and put under the altar in the Lateran Cathedral. A part of the relics which are now in France, near the city of Marcel. Another few parts are kept in the monasteries of the Mount Athos and in Jerusalem. As a result of the crusade of 1204, when Constantinople was conquered and pillaged, many of the saints’ relics were moved out of the city to the West.
In the Western historiography there is a theory, that Mary Magdalene was the very sinner who washed the Christ’s feet with her tears in the Simon’s house (Luke, 7:38). Also she is identified with Mary – the sister of pious Lazarus. But the Eastern fathers think that these are three different persons. This point is quite important as the sense of the Saint’s feat and apostolic work depends on it. According to the Western tradition, Saint Mary was the sinner, and those seven demons which were cast out by Christ were her reckoning for all her sins. That is why in the sermons of Western clergy Saint Mary is honored as the example of the true repentance. The Eastern tradition differs: it says that these were two different women and Saint Mary was the one who demonstrated “the works of God” (John, 9:3). She was obsessed by the demons not for her sins or the sins of her parents, but God let that happen, so that Christ could show people the work of God – the healing of Mary Magdalene, the enlightenment of her mind and her conversion to the true faith and life eternal. She was honored much in the West, and her care about Christ inspired people to do good and help the people in need. That is why in the middle ages a lot of asylums were built in honor of Saint Mary of Magdalene. 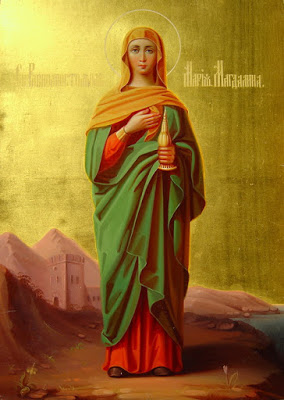 She was always faithful to her Divine Teacher. The transportation of her relics fostered the spreading of her fame all over the world, and thus even more people began to worship her. At the present time people pray to her throughout the word in many countries and churches. The name of the Saint Myrrh Bearer and her feats proclaim the resurrection of Christ. There are the following words about her in the Synaxarion on the week of the Saint Myrrh Bearers: “Many were the Myrrh-Bearers, but the Evangelists mentioned only the important ones, leaving the others aside. First of them all was Mary Magdalene, from whom Christ had cast out seven demons; after the Ascension of Christ, she went to Rome, as the story has it, and delivered Pilate and the High Priests to an evil death, after relating to the Emperor Tiberius the events surrounding Christ; she later reposed in Ephesus and was buried by Saint John the Theologian; her holy relics were translated to Constantinople by Emperor Leo the Wise.”
Once a preacher said: “Saint Mary Magdalene is a great example of honoring love to God. And each Christian soul should be full of the same firm feeling of to our Lord. Due to His sufferings which brought us redemption you can get free from sin, corrupting the souls from the inside and having the power over people since the time of the original sin, through the sacrament of baptism, just as Magdalene did”. 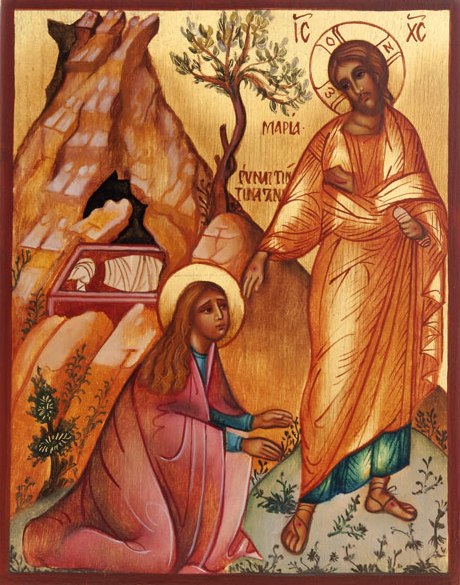 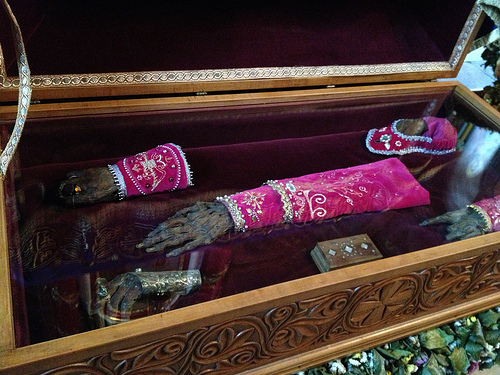 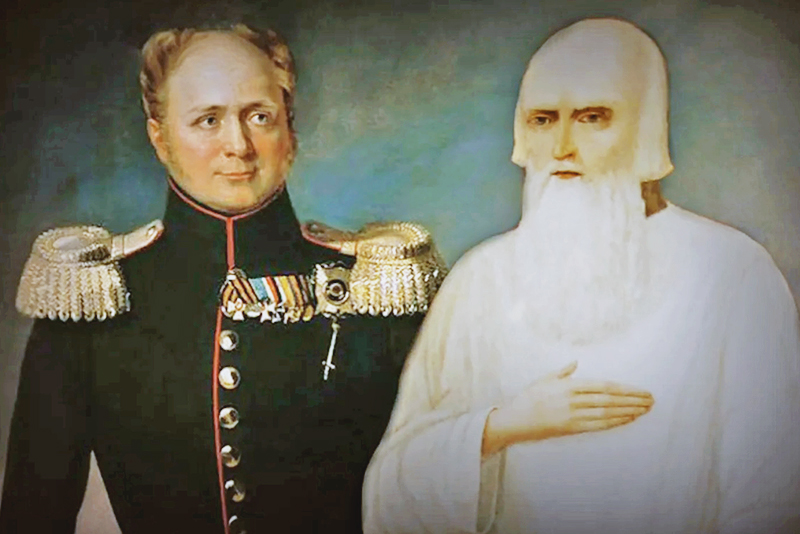 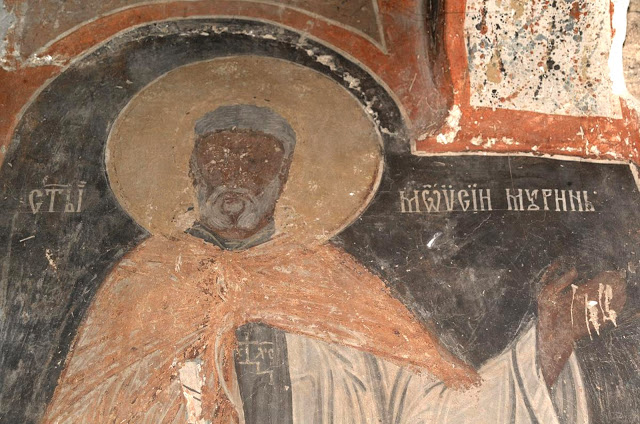