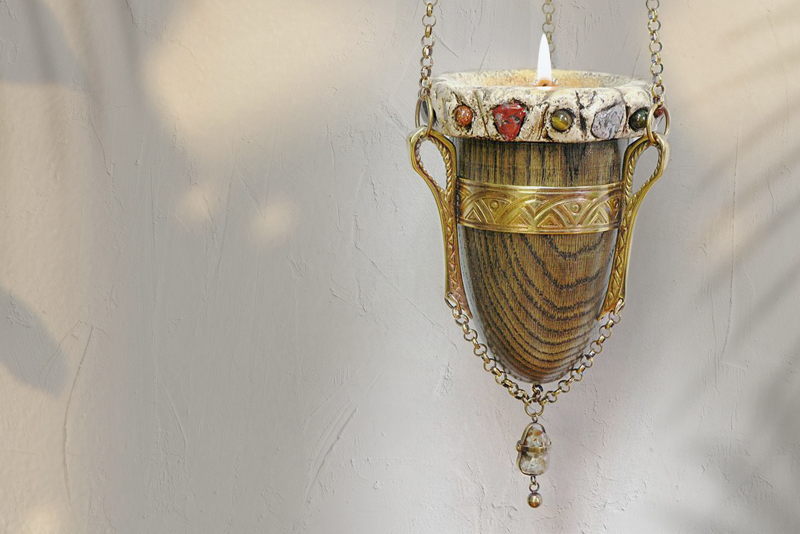 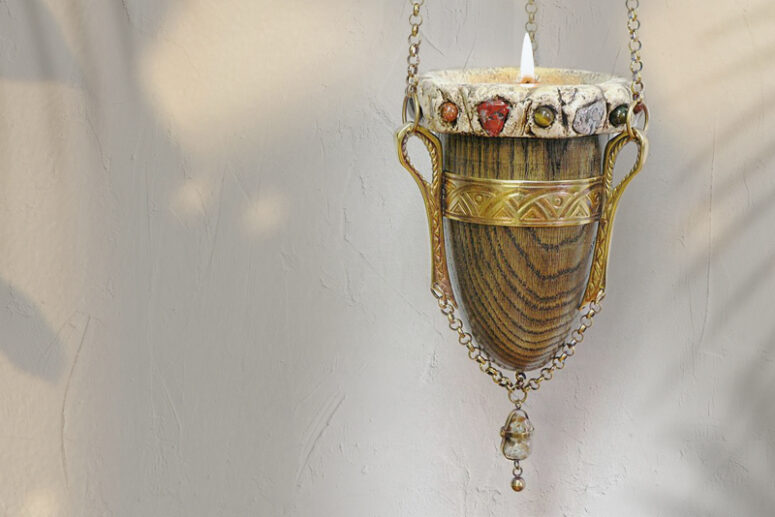 Vigil (Oil) Lamps (from the Greek – λάμπα) are small vessels with burning oil, hung in front of icons, placed in the altar or lit during private prayer. This church utensil is familiar to every Christian. What do we know about its origin, meaning and symbolism? Below are some lesser known facts about vigil lamps.

Lighting oil lamps in front of sacred objects was commanded by God Himself in the Old Testament: “The Lord spoke to Moses, saying: Command the people of Israel to bring you pure oil of beaten olives for the lamp, that a light may be kept burning regularly <…> to burn from evening to morning before the Lord regularly; it shall be a statute forever throughout your generations. He shall set up the lamps on the lampstand of pure gold before the Lord regularly” (Leviticus 24: 1-4).

The ancient prototypes of modern lamps were used in everyday life long before the advent of Christianity. These small hollowed stone bowls were not particularly elegant and served for illuminating rooms.

Turned clay and terracotta lamps were spreading  in the Roman Empire and Byzantium from the 3rd century BC through the first centuries AD. They were decorated with various symbols, geometric shapes and images. A large collection of such lamps dating back to 3-4 centuries AD was discovered in Israel in the 20th century. 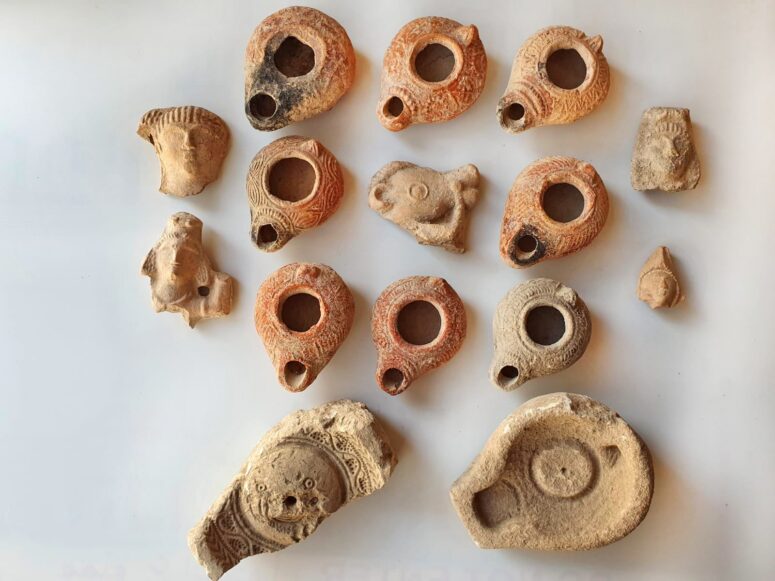 Some oil lamps were made with a closed top. With the spread of Christianity in the 4th century, religious symbols were  finally openly used to decorate oil lamps. They included images of the cross, the Savior, a lamb, a dove, etc. 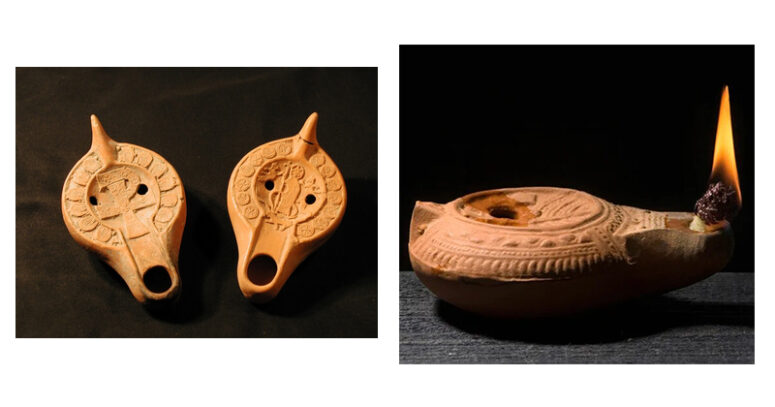 We can assume that during the earthly life of Jesus Christ and in His parable about the ten virgins, oil lamps were something similar.

Ancient Use and Symbolism

Forced by their persecutors to hide in caves and catacombs, early Christians had to perform their services secretly and used lamps primarily for illumination. Believers attached a special spiritual meaning to lamps, as is the case with some other elements of everyday life.

The Savior himself uses the example of a lamp in the Gospel, explaining spiritual concepts to his disciples. “Be dressed for action and have your lamps lit” (Luke 12: 35) – says the Lord, calling us to be bodily and spiritually vigilant, ready to suffer for our faith and appear at any moment before the Judgement of God. The parable of the ten virgins also uses lamp oil as a symbol of good deeds and Divine grace, which we are called to multiply in our lives, not thinking erroneously that we have already done enough for our salvation. 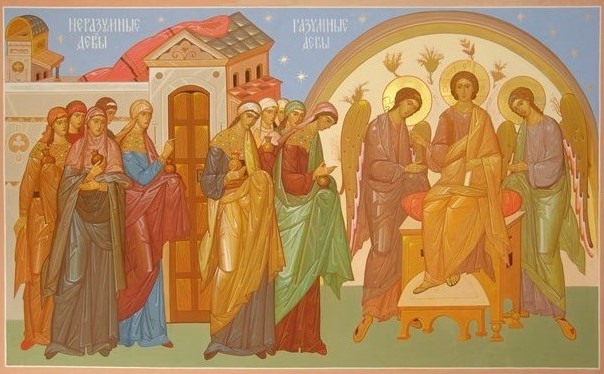 Thus, a burning lamp, both in antiquity and today, symbolizes the Divine light and the unceasing fervent prayer of the faithful. Since the dawn of time oil lamps burned unceasingly in churches and in front of great shrines. Christians often donate oil and lamps to churches for lighting in front of revered icons and holy relics as a sign of reverence and love. For example, in the Life and Pilgrimage of Hegumen Daniel of the Russian Land (a 12th century book), the author describes himself lighting a lamp in front of the Holy Sepulcher in Jerusalem on behalf of the entire Russia. It is there to this day, burning among the lamps from various local churches (including the Russian Orthodox Church) as a partaker in the miracle of the descent of the Holy Fire. A case is known from antiquity when an oil lamp participated in a miracle. The great-grandson of King Abgar V, falling into paganism, wanted to destroy the Image of Edessa. The local bishop decided to hide the miraculous icon, immuring it in the wall together with a lit lamp. This shrine was remembered and re-acquired only in the 6th century, at the behest of the Mother of God. Having disassembled the wall, people saw that the lamp in front of the icon continued to burn.

From Antiquity to Modern Days

It is difficult to say exactly when the pendant oil-lamps appeared in church (similar to those seen today) but documents show that small ornamented bronze icon lamps with coasters, suspended on three chains from a star-shaped mount with a ring, were already common in Russia in the 12-13 centuries.

The surviving artifacts from the Middle East show that in the 17th century expensive lamps (probably donated by wealthy believers) were intricately carved from expensive metals and decorated with precious stones.

Even the oil lamps donated by rich people looked more modest in 19th century Russia. Although metal remains the main material used in their manufacture, the methods of processing and decorating them are different (for example, the characteristic filigree enamel).

There are also porcelain lamps. This expensive type of pottery was very popular in the Russian Empire at the turn of the 19th century and is often found in important cathedrals of that time.

Nowadays, in Orthodox churches you can find hanging lamps manufactured of many different materials and reflecting various techniques and traditions. Modern technologies make it possible to create real works of art.

Inspired by the ancient prototypes, the artisans in our Non-ferrous Metals Workshop have mastered producing oil lamps with materials that are not quite common today. For example, lamps made of natural wood, framed in metal and decorated with semi-precious stones. These lamps can be seen today in the wooden church in honor of St John of Shanghai and San Francisco located in our monastery . They create an enchanting atmosphere of antiquity in a completely new church.

Another unusual material for making lamps is fired clay. Using this ancient mineral, we are not trying to replicate lamps of the first centuries. Rather we are looking for ways to inscribe history into contemporary reality and to combine tradition and modernity.

A lit lamp, whether at home or in church, connects us with the heavenly and divine world. We hope that your lamp will become for you an inspiration to prayer and virtue, and maybe even a source of a miracle. 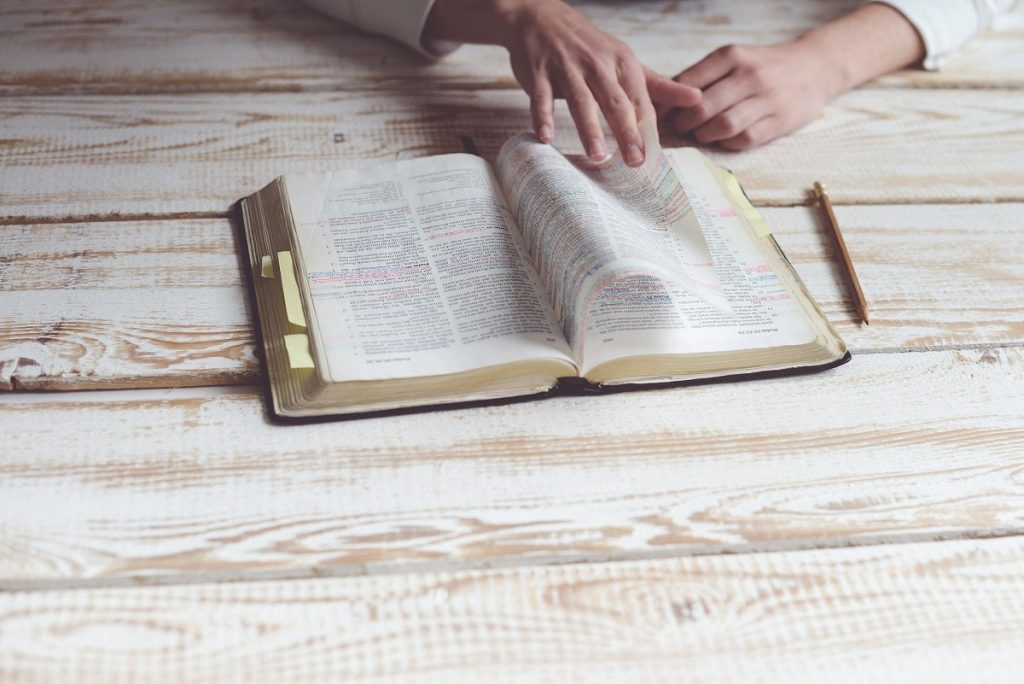 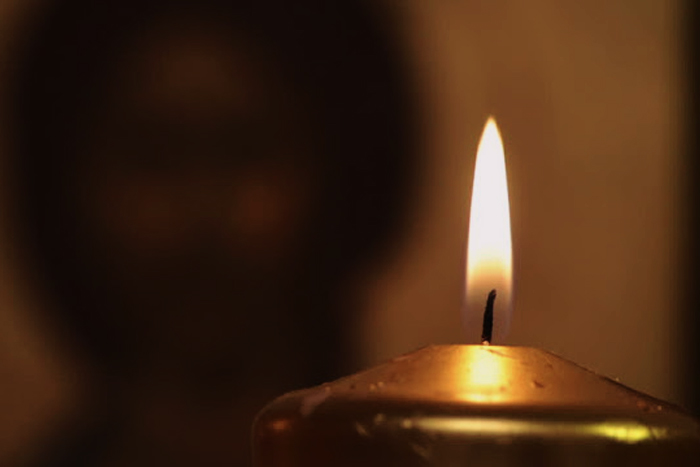