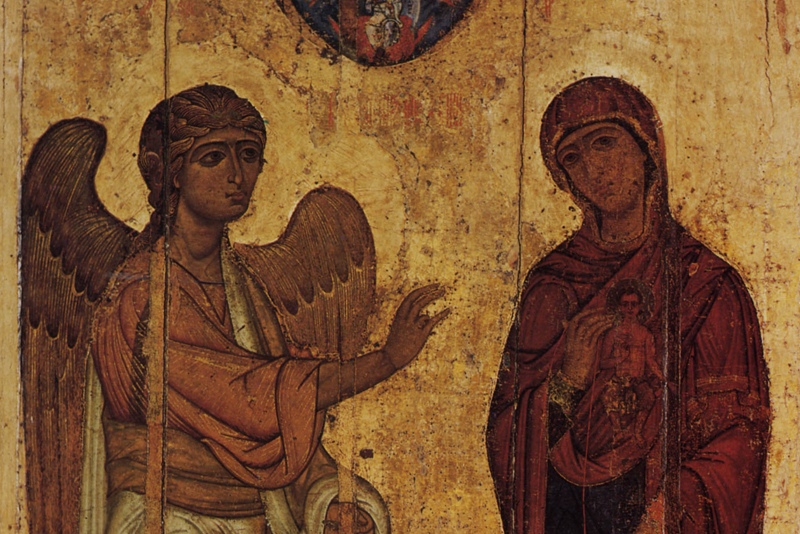 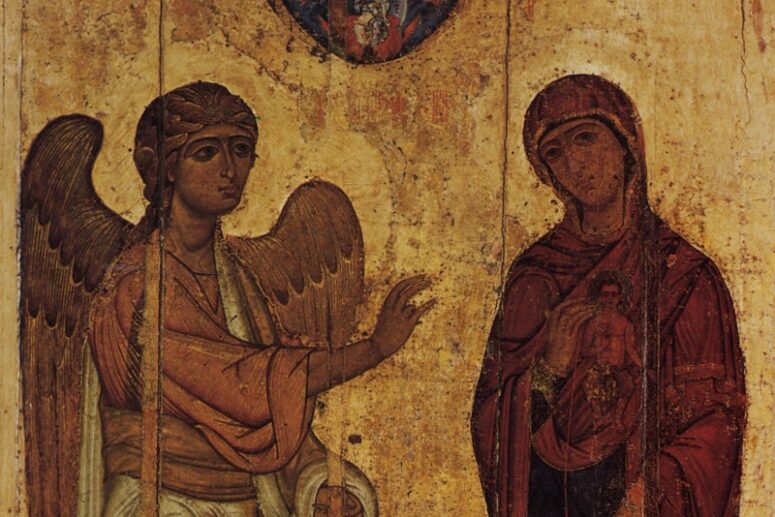 The iconography of the Annunciation is based on St Luke’s description of the Archangel Gabriel appearing to the Virgin Mary and announcing the future birth of the Savior from Her (Luke 1, 26–39). The images of the Annunciation are quite diverse, have several iconographic versions and are sometimes full of interesting details. These details are derived from non-canonical sources, since the Gospels say virtually nothing about the life of the Mother of God.

Although the church began to widely celebrate the day of the Annunciation of the Most Holy Theotokos only in the 6th century, images dedicated to this event appeared much earlier. The earliest image of the Annunciation dating back to the 2-3 centuries was found on the wall of St Priscilla’s tomb in the Catacombs of Rome. According to the researchers’ description, the mural depicts a wingless angel knelt before the Virgin. The angel stretches out one hand to the Theotokos, holding a scroll in the other. The Blessed Virgin is depicted seated, with an expression of surprise on Her face.

Later, the icons of the Annunciation widely depicted the winged archangel Gabriel with a paradise branch in his hands symbolizing a joyful greeting. The Blessed Virgin was typically depicted seated or standing with a book inscribed: “Behold the Virgin is conceiving.”

The main iconographic type of the holiday is called “the Annunciation with yarn”. It appeared from the text of the apocryphal Gospel of James (XI, 1) written in the 2nd century. According to it, the Most Holy Theotokos was spinning yarn for the curtain of the temple in Jerusalem at the moment the archangel appeared to Her. This iconographic type is represented in Russia by the Kiev and Moscow versions.

The earliest known image of the Kiev version appeared in the 11th century at St Sophia’s Cathedral in Kiev. It comprises the mosaics of the Archangel Gabriel and the Mother of God, together forming the composition of the Annunciation on the eastern pillars supporting the altar arch. Archangel Gabriel is facing the Mother of God; his right hand is raised in a blessing gesture, and he is holding a staff with his left hand. The Greek inscription next to the archangel says: “Archangel Gabriel: Rejoice, O favoured one, the Lord is with You” (Luke 1:28). The Blessed Virgin is standing with yarn in Her hands, next to the Greek inscription: “I am the Lord’s servant. May your word to me be fulfilled” (Luke 1:38).

This image is free from any details indicating the scene. This symbolizes the hidden nature of the beginning of the Incarnation. The minimal set of details was also a characteristic feature of the Macedonian-dynasty-era Byzantine icon painting.

It is noteworthy that the mosaics of the Archangel and the Blessed Virgin differ stylistically due to the fact that they were made by two different mosaicists. The image of the Mother of God was laid out by a skilled Greek artisan. He used smalt of different shades of blue to convey Her smoothly flowing robes with many folds. For the facial image he used pinkish and white cubes in combination with greenish-gray in the shadows. Archangel Gabriel is distinguished by his massive and heavy figure, as well as the angular and brittle folds of his robes.

The Annunciation images in the Moscow Assumption Cathedral and the Myrrh-Bearing Church in Novgorod represent one or more maids sitting at the feet of the Theotokos. In contrast with the Kiev type, the spinning is done by the maids and not by the Mother of God Herself.  This is a characteristic feature of the Moscow iconographic version.

The Ustyug Annunciation has a characteristic detail that distinguishes it from other images. It is the Infant Christ, depicted on the breast of the Theotokos as a symbol of the supernatural conception that occurred during the angelic annunciation.

This icon was recognized as miraculous after St Procopius of Ustyug prayed before it in 1290 for the salvation of the city of Veliky Ustyug from being destroyed by the “stone hail” caused by a meteorite falling near the city. According to the life of the saint, during his prayer, the icon began to exude myrrh, and the calamity ended.

An equally glorious story is connected with the second icon. It dates back to the 16th century, when the royal court granaries adjoined an unnamed tower used to keep convicts. According to legend, one slandered general was imprisoned there under Tsar Ivan the Terrible. The prisoner was patiently enduring the trial sent to him by God and praying fervently for mercy and deliverance when one day the Mother of God appeared to him and ordered him to ask the king for freedom. The general did not dare, fearing to increase the tsar’s anger. Then the Blessed Virgin appeared to him again and promised her help. The prisoner obeyed and fulfilled Her will. When the messengers sent to him approached the tower, they were amazed upon seeing on the wall of the tower an icon of the Annunciation not made by hands. When the tsar learned of this miracle, he immediately freed the general and ordered to build a chapel near the miraculous image. In 1731, by the decree of Empress Anna, a temple was erected in this place, so that the outer wall of the tower with the image of the Annunciation became the inner wall of the church. The image was then decorated with a beautiful icon case. In 1932, the temple was dismantled, and the icon displayed on the wall of the tower was lost. 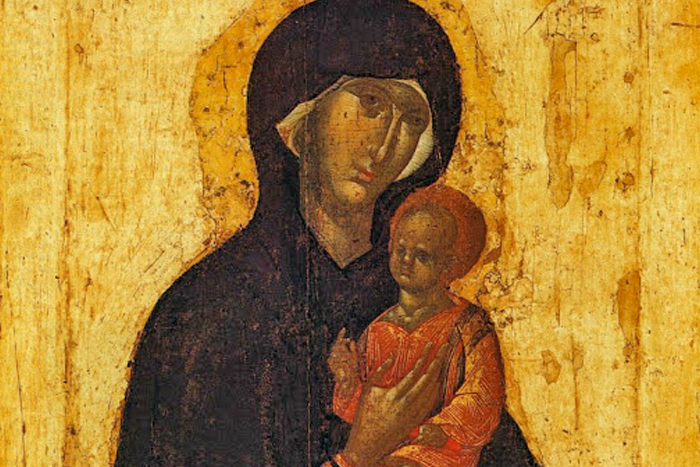 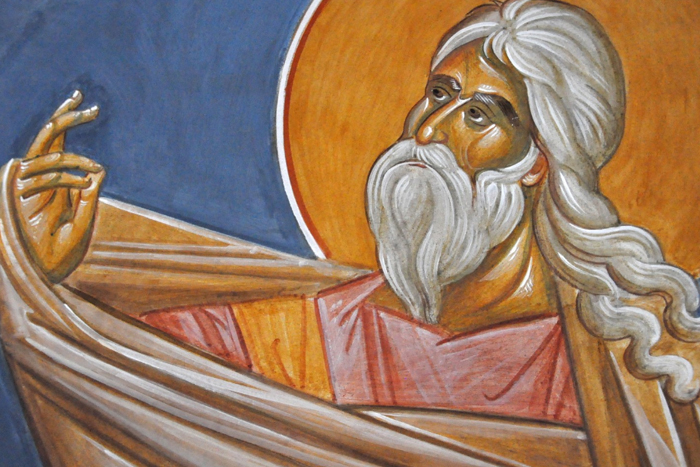 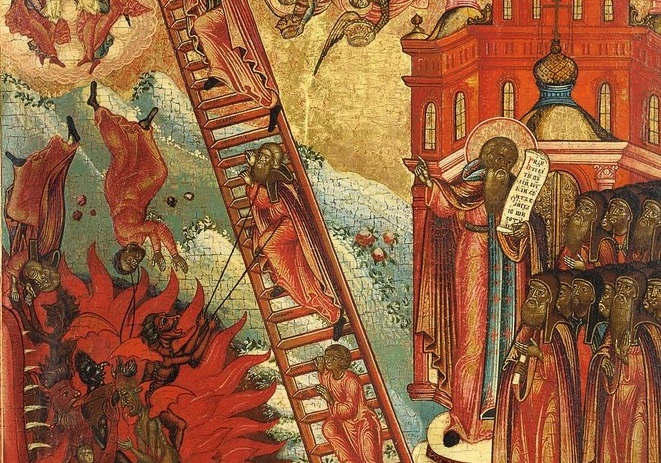