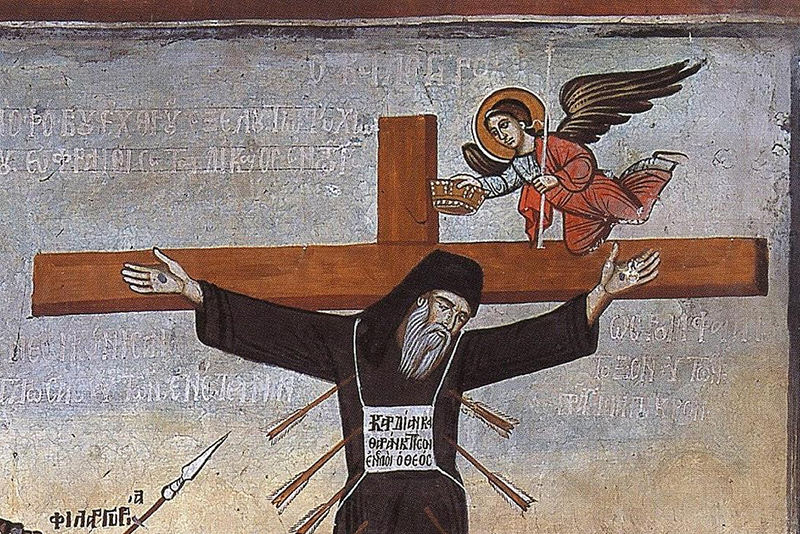 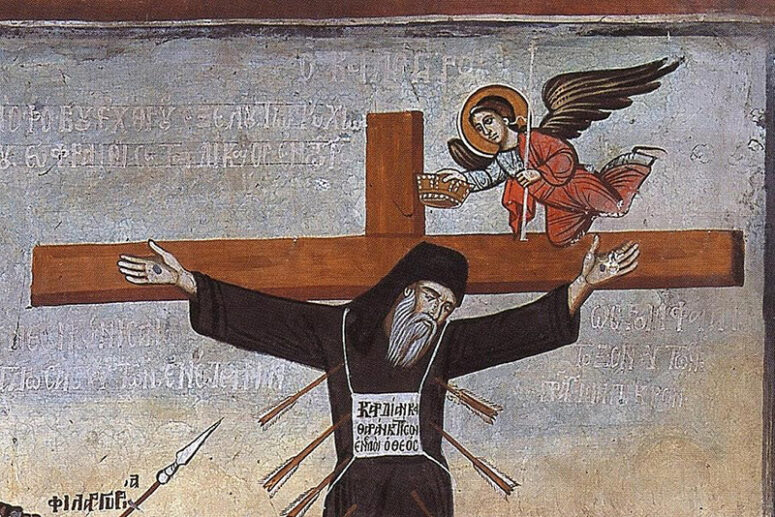 Around the entrance of refectories in Orthodox monasteries, there can sometimes be seen a shocking image of a monk being crucified. The unnamed monk silently reposes on the cross, whilst around him he is assailed by terrifying demons and skeletal figures. Just as shocking as the image itself is the inscription which accompanies it: The True Life of a Monk

Monasticism is an ancient Christian practice which developed in the 3rd and 4th centuries A.D., around the time when Christianity became legalized in the Roman Empire and persecutions practically ceased. This has sometimes been given as a reason for the rise of monasticism: the desire for zealous Christians to flee from the world where living the Christian life was suddenly comfortable, “easier”, and even fashionable. However, all the greatest monastic saints, in their writings, give one source for their motivation for entering a monastery: the Gospels.

A perfect example of this is from the life of St Anthony the Great. In his hometown church, Anthony heard the Gospel reading proclaimed, as if spoken to him directly: “If you would be perfect, go, sell all you have and give to the poor, and come and follow me.” And so Anthony was inspired to live a life which became the foundation for monasticism, putting forward the basic motivation for monks and nuns ever since.

With such a basic Scriptural motivation for monasticism, this way of life becomes a lot more interesting for every Christian.

The Icon: “True Life of a Monk”

The image of the crucified monk is didactic: an icon for contemplation, not veneration. The subject of the icon is not a named Saint, but an unnamed, generic figure of a monk – or a nun if it is found in a female monastery. In its fullest form, the image looks as it does in the picture above from an Athonite fresco. Initially quite confusing, the image is replete with inscriptions which fully explain what is going on, and the only barrier to understanding is not being able to read the language of these inscriptions.

I can give no better explanation of the icon than to reproduce an extract from the The “Painter’s Manual” of Dionysius of Fourna, an 18th century Greek text for iconographers:

Draw a monk crucified on a cross, clothed in a tunic and a monk’s hat, barefoot and with his feet nailed to the footrest of the cross; his eyes are closed and his mouth shut. Just above his head is this inscription: “Set a watch, O Lord, before my mouth; keep the door of my lips”.

In his hands he holds lighted candles, and next to the candles is this inscription: “Let your light so shine before men, that they may see your good works, and glorify your Father, which [is in heaven]“.

On his chest he has a tablet like a hassock, which says: “Create in me a clean heart, O God, and renew a right spirit within me.”

On his stomach is another scroll, like a title, with these words: “Do not be led astray, O monk, by a full belly.”

Lower down on his body is another scroll which says: “Mortify your members which are upon the earth.”

Lower down again, below his knees, is another scroll which says: “Prepare your feet in the way of the Gospel of peace.”

Above, in the top arm of the cross, make a title nailed on with this inscription: “God forbid that I should glory, save in the cross of my Lord.” On the three arms of the cross make seals, and in the right one write this: “He that endures to the end shall be saved.” In the left-hand one: “He who does not renounce everything is not able to be a disciple of Christ.” On the seal above the footrest of the cross: “Strait and narrow is the way that leadeth unto life.”

To the right side of the cross paint a dark cavern with a big dragon in it coiled up, and write: “The all-devouring Hell.” Over the mouth of the dragon is a naked young man with his eyes bound by a cloth, he holds a bow and shoots at the monk. On his bow is a scroll which says: “Maker of lust.” Write this inscription above him: “The love of harlotry.” Above the cave put many snakes and write: “The cares.” Near to Hades put a devil dragging at the cross with a rope and saying: “The flesh is weak and cannot resist.” At the right-hand end of the footrest put a spear with a cross and a flag and write on it: “I can do all things through Christ Who strengthens me.”

To the left of the cross make a tower with a door, out of which comes a man sitting on a white horse, wearing a fur hat and robes woven with gold and trimmed with fur. In his right hand he holds a cup full of wine and in his left a lance on the end of which is a sponge; a scroll is wrapped around the lance which says: “Take delight in the pleasures of the world.” He shows them to the monk. Write this inscription above him: “The vainglorious world.” Below him put a grave out of which Death is coming holding a large scythe on his shoulder and an hour-glass in his hand, and looking at the monk. Above him is the inscription: “Death and the grave.”

Below the hands of the monk on either side put two angels holding scrolls; write on the scroll of that on the right: “The Lord has sent me to help you.” And on that on the left: “Do good and fear not.”

Above the cross represent heaven with Christ in it, holding the Gospels on his breast open at the words: “Whosoever will follow me, let him deny himself, and take up his cross, and follow me.” In his right hand he holds a king’s crown, and in his left a crown [of flowers]. Below him to either side are two angels, looking at the monk and showing him to Christ, and holding between them a long scroll with these words: “Fight that you may receive the crown of righteousness, and the Lord will give you a crown of precious stones.”

Then write this title: The life of the true monk.

Some versions of this icon will be simplified, or will show demons surrounding the crucified monk firing arrows at him (see the first image of this post). The arrows and spears directed against the monk will be identified by inscriptions as various “passions” (vainglory, lust, gluttony etc).

The image painted for monastics to contemplate and therefore properly belongs in a monastery. The “true life of a monk” is not necessarily the true, Christian, life for all of us. If we are not monks or nuns, we should not pretend to be so. Yet insofar as the monastic life is based in the Gospel and instructs all Christians on how to live a Christian life, the icon of the Crucified Monk can be useful. While ever “lay” Christians read monastic literature like “The Ladder of Divine Ascent”, retreat temporarily to monasteries, or in other ways draw on the monastic experience, they can also gain benefit from this icon. 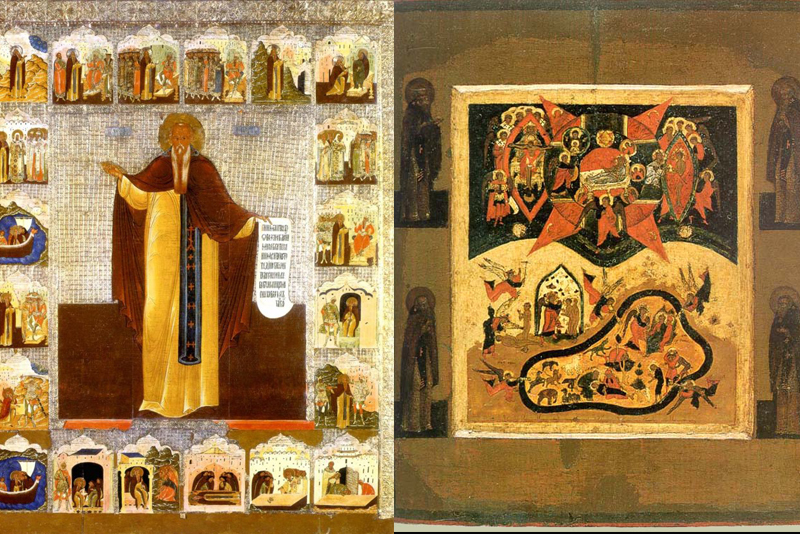 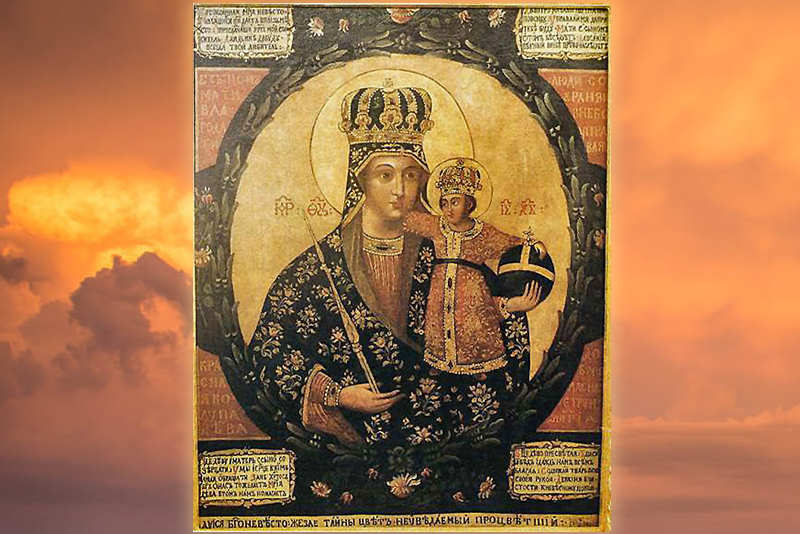 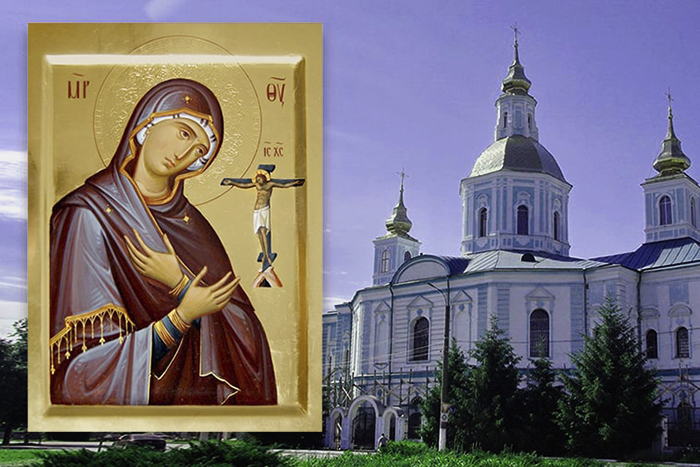